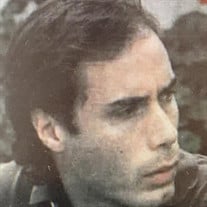 JEFFREY W. HYATT, age 62, son of Dr. Solomon A. Hyatt & Maureen (Tresoor) Hyatt, both of whom predeceased him, died at his home in Lawrence, MA on July 28, 2021, after a brief illness. Jeffrey was the director of the hit Off-Broadway murder mystery PERFECT CRIME, now in its thirty-fourth year, the longest-running non-musical play in New York theatre history. He was a three-time recipient of the Gilbie Award for Best Actor at the Catholic University of America, where he earned a Master of Fine Arts degree in Acting in 1984 and was building manager for Hyatt Chiropractic, founded by his father over 60 years ago. Jeffrey began his education at St. Francis Grammar School in Lawrence and maintained his relationship with the order of Nuns who taught there, the Sisters of Jesus Crucified, and remained one of their benefactors. He graduated from Central Catholic High School in Lawrence and became a benefactor of the Marist Brothers who taught there, bonded by his friendship with Brother Rene Roy. Jeffrey then attended and received his B.A. from The College of the Holy Cross in Worcester, MA prior to getting his Masters at Catholic U in Washington, D.C. He was also a benefactor of the Poor Clare Monastery in Andover and of St. Basil’s Seminary in Methuen. Jeffrey leaves behind his sister Valerie Hyatt, and her daughters Sofia DiMarca and her fiance Anthony Mazola, their daughter Ava, and Kenzie McKinnon and her husband Tom McKinnon, and their children Kayla, Rae, Chase and Meadow, along with his niece Allison (Hyatt) Battles, her husband Scott and their children Kiera, Ethan and Noah, his step-mom Pat (Twomey) Hyatt and step-sisters Erika Twomey Dion, her husband Rich, and daughters Kylee and Madison, Erin Twomey Sutliff, her husband Craig and their sons Aiden and Declan. Also, his beloved cousins Gail and Pamela Baderian, Atty. Armand Hyatt, Father Martin Hyatt, Nadema (Hyatt) Gemmell, Dr. Peter Hyatt, Sofia (Hyatt) White, Atty. Francis Hyatt, Dr. Joseph Hyatt, and their many beautiful children, whom Jeff visited often – he was particularly proud of Carter White and Solomon White for their military service in the U.S. Army. He also leaves behind beloved Canadian uncles Terry Tresoor and his wife Shirley, Ken Tresoor, and Alan Tresoor and his wife Elaine, and many beloved Canadian cousins. Late in life, he was blessed by two goddaughters, Serena and Sophia Reitano of Lowell. Jeffrey has worked on more than one hundred and fifty productions at the community, educational, regional and professional levels in Washington, D.C., New York City and nationwide. Among the many roles he has performed are John Adams in the Garrett Players production of 1776, Arnolphe in Moliere’s School of Wives, Sebastian and Malvolio in Shakespeare’s Twelfth Night, Father Rivard in The Runner Stumbles, the Emcee in Cabaret, and Oedipus in Oedipus the King. He performed the role of Henry David Thoreau in his own compilation of Thoreau’s words in a highly successful monodrama entitled Walden Pawned before several select audiences from Maine to Florida, including right at Walden Pond in Concord, MA in the late 1990s, which performance was filmed by local public television. Equally comfortable in comedy, farce, drama, or musicals—trained in both classical and contemporary theatre—Jeffrey cherished his stint with the National Players 37th Tour, during which he performed in seventy-one cities, and his work as Acting Lab Director at the Hartke Theatre Conservatory for four summers in Washington. Perhaps his most rewarding experience was in his native area, Greater Lawrence, MA where he was a member of the prominent theatre company, The Garrett Players, in the early 1980s and then with the Jackson Street Players, a theatre group he formed in 1990 at the Lawrence Heritage State Park in Lawrence, MA, which included his directing two productions assisting persons of varying abilities and disabilities. That work also involved his editing and performing in a two-actor, Reader’s Theatre version of Charles Dickens’ A Christmas Carol, in which he portrayed twelve different characters. As an acting teacher, Mr. Hyatt coached both students and professionals of all ages and at all levels of experience. As a serious student himself, he was involved with virtually every facet of theatre production for forty-four years. Jeffrey also volunteered his service to direct the successful production of Mary Jane Jennings’ play, Crumbs, in 2008 at Holy Family Parish in Amesbury, MA. As a young boy Jeffrey loved spending his summers at Shadow Lake in Salem, NH at his grandparent's camp. He especially relished spending time with his Nana and his extended family. He enjoyed riding the train from Boston to Winnipeg, Manitoba, Canada, the birthplace of his mother, Maureen Tresoor and her six siblings. He spent time with his grandparents and many aunts, uncles, and cousins at their camp in Kenora, Ontario during many summer vacations. Jeffrey loved them all and took the time to keep in touch throughout the years despite the distance. Family was a priority for Jeffrey, which made the sudden passing of his beloved parents—his mom when he was 17 and his dad when he was 38— devastating for him. He sacrificed time on a regular basis to ensure the graves of his deceased family members were adorned with flowers and always pristine. He was kind, and whenever he saw a need he responded generously. He was a constant in the lives of his family and will be greatly and sadly missed. A holy Mass of the Resurrection will be offered at Saint Lucy Church, 254 Merrimack St, Methuen, MA 01844 on Tuesday evening, August 17th at 5:00. Funeral Arrangements are being made through Breen Funeral Home in Lawrence.

JEFFREY W. HYATT, age 62, son of Dr. Solomon A. Hyatt & Maureen (Tresoor) Hyatt, both of whom predeceased him, died at his home in Lawrence, MA on July 28, 2021, after a brief illness. Jeffrey was the director of the hit Off-Broadway murder... View Obituary & Service Information

The family of Jeffrey William Hyatt created this Life Tributes page to make it easy to share your memories.

Send flowers to the Hyatt family.