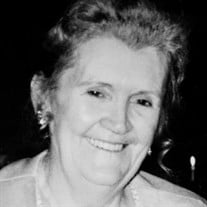 Jane Ellen (Gallagher) Melia, 97, a resident of Methuen, MA, passed away on Wednesday October 11, 2017 surrounded by her loving family. Born in Methuen, she is the daughter of the late John A Gallagher and Jane C. (Hughes) Gallagher. Also called Genevieve by family members, Jane was a graduate of St. Rita Grammar School and St Mary’s High School class of 1937. She is a graduate of the McIntosh School of Business having worked as a secretary for Radio Foods where she met her husband of 57 years Martin. She also worked at Burke and Bon Secours Hospital, and while her children attended College, she was Office Manager at Raytheon in Andover. She later worked as Library Assistant for the Lawrence Public Library where she retired from in 1985 An avid reader and craftswomen, Jane was very creative and following her retirement she took courses in Quilting, Doll and wreath making, Rug Braiding and Chair Caning. Her crafts are displayed in the homes of her children and grandchildren and cherished by all who knew her. She loved to go antiquing and enjoyed spending her retirement years with her husband Martin at their vacation home in Maine. A devoted and loving wife, mother, grandmother and great grandmother, Jane was a strong woman who always worked hard to put her large family’s needs before her own. She is the widow of Martin F Melia and the mother of the late Martin G. Melia. She leaves and will be lovingly remembered by her sons: Michael and his wife Linda of Pelham NH, Edward, Stephen, John and his wife Kathleen of Methuen MA and Daniel of Fayette ME. daughters: Mary Jane and her husband Paul DeCorpo of Dracut, Patricia Melia Wholey of Methuen, Ann McClellan of Derry, NH and Kathleen and her husband Philip Gardella of Newburyport. Jane also leaves behind her two personal and extremely dedicated caregivers who assisted in her care when her health declined in 2014. Mrs. Melia is also survived by 22 grandchildren, 21 great grandchildren and several nieces and nephews. She is predeceased by 4 brothers Mark, John, James and Francis, son in law Randy McClellan and grandson Joseph McClellan. A Funeral Mass will be celebrated on Wednesday, October 18, 2018 at 11:00 A.M. in St. Monica’s Church, 212 Lawrence St. in Methuen. Burial will follow in St. Mary’s Cemetery in Lawrence. Family and friends are invited to call on Tuesday, October 17, 2017 from 4 to 8 P.M. at the John Breen Memorial Funeral Home Inc., 122 Amesbury St., Lawrence, MA. Memorial contributions may be made in Mrs. Melia’s name to Merrimack Valley Hospice, 360 Merrimack St., Lawrence, MA, 01843. To send an online condolence or for more information, please go to www.breenfuneralhome.com.

Jane Ellen (Gallagher) Melia, 97, a resident of Methuen, MA, passed away on Wednesday October 11, 2017 surrounded by her loving family. Born in Methuen, she is the daughter of the late John A Gallagher and Jane C. (Hughes) Gallagher. Also called... View Obituary & Service Information

The family of Mrs. Jane Ellen Melia created this Life Tributes page to make it easy to share your memories.

Send flowers to the Melia family.