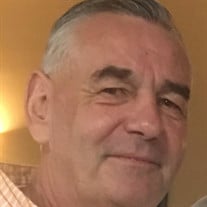 James H. Timmons, 61, of Salem, NH, formally of Lawrence, Massachusetts and Wakefield, Massachusetts passed away Friday, March 22, 2019 . He was born on November 27, 1957 in Lawrence, Massachusetts to the late Charles and Doris (Gauthier) Timmons. James was a graduate of the Greater Lawrence Regional Vocational Technical High School and was an attendant of Saint Patrick’s Church in Lawrence, MA. He worked for the Lawrence Eagle Tribune for over 30 years and was the current owner of JT’s Bar and Grill in Salem New Hampshire. He is survived by his wife Kerry Timmons of Wakefield, MA. Sons: Sean Timmons and his wife Laurie of Salisbury, MA. Brian Timmons and his wife Melissa of North Andover, MA., Kevin Timmons and his wife Megan of Lawrence, MA. His brother Charles Timmons and his wife Lynn of Buffalo, NY his sister Karen Pearson and her husband Richard of Pembroke, NH his companion Amy Kimball of Salem, NH., as well as several grandchildren, nieces, nephews and cousins. He was predeceased by his brother Dennis Timmons. Relatives and friends are cordially invited to call on Thursday, March 28, 2019 from 4 PM to 8 PM at the John Breen Memorial Funeral Home, Inc., 122 Amesbury St., Lawrence, MA. His funeral mass will be held on Friday, March 29, 2019 at 11 AM in Saint Patricks Church, 118 South Broadway, Lawrence, MA. His burial will be private. For online condolences and other information please visit us at www.breenfuneralhome.com.

The family of James H. Timmons created this Life Tributes page to make it easy to share your memories.

Send flowers to the Timmons family.