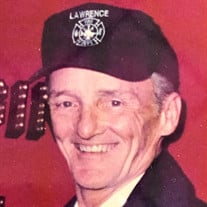 James Andrew Reusch, 83, of Salisbury, MA a proud Veteran of the United States Air Force, formerly of Lawrence, passed away peacefully at his home on June 20, 2019. He was born in Lawrence to the late Augustine and Mary (Batts) Reusch. Growing up, he attended St. Laurence O’Toole Elementary and graduated from Central Catholic High School. In January of 1955, he enlisted in the U.S. Air Force. After basic training, he was assigned to Keesler Air Force Base in Biloxi, MS where he was assigned to the USAF Security Service specializing as a radio intercept operator. He was stationed in Bremerhaven, Germany for four years as part of the 6913th RSM receiving and translating messages in Morse code. During his time in Germany he played on the military base, flag football, baseball, and basketball teams; winning European championships in baseball and flag football, competing against American military bases throughout Europe. He treasured his time in the service and has maintained close friendships with the men he served with. Upon returning to the States following his service, Jim was employed at Reusch’s Service Stations until 1966 when he was appointed a reserve Firefighter in the city of Lawrence. He became permanent in 1969 joining his father, Gus, Uncle Nick, and cousin, Leo Turner on the department. He attended North Shore Community College for Fire Science. He was appointed Lieutenant in 1985 and he retired in 1992 after 26 years of service. Nicknamed “Cricket”, he spent almost his entire career on Ladder 4 at Central Fire Station. His last two years on the job were spent in Fire Prevention where he enjoyed visiting elementary schools and working with young children. He loved being a firefighter and part of the brotherhood where he made lifelong friends. Jim played softball for years in The Greater Lawrence Fast Pitch Softball League and later the Social Club Softball League. When his playing days were over, Jim turned his knowledge and love of the game to umpiring. He joined the Merrimack Valley Umpires Association, and for 28yrs, you could often find him on local high school fields in the afternoons and umpiring men’s or women’s games throughout the Merrimack Valley at night. He was well respected by umpires, coaches, and players alike. Family was everything to Jim and he loved going to large family gatherings on the holidays or attending a celebration for a special occasion. Jim’s greatest enjoyment in retirement came when his grandchildren began to arrive as he was young and healthy enough to be their daily caretaker. He loved and cared for each one in their own special way from birth until they went to school. He never missed a school play, concert, or sporting event they were involved in. As they got older, breakfast with Papa on Thursday or Saturday was a regular event. Jim and his wife Winnie enjoyed traveling and through the years, with a close group of friends, they traveled to many destinations. Among them was a cruise to the Baltic Capitals of Europe where Jim got to revisit Berlin, Germany and Copenhagen, Denmark. There was a special anniversary trip to Ireland and during these same years they attended several 6913th Reunions with his Air Force buddies. His final trip was his favorite, when he cruised to Bermuda with his wife, children and grandchildren. He walked the plank of a pirate ship, snorkeled, and danced the night away with his grandchildren. Jim is survived by his wife the former Winifred (Winnie) Gillen and his three children and their spouses; son, Michael J. Reusch and wife Nancy (Nartiff) of Salisbury, daughters, Martha J. Tatro and husband Stephen, also of Salisbury, and Kate Keyes and husband Kenneth of Haverhill. He leaves five beloved grandchildren; Jessica and Christopher Reusch; Mackenzie and James Tatro; and Sydney Keyes. In addition, he is survived by his brothers and their spouses, Augustine and wife Ann Reusch, Andrew and wife Connie Reusch. His sisters, Mary and husband Jack Horan, Frances Zahn, Kate and husband Phil Howshan, Jean and husband Phil Lane. He was predeceased by his brothers John and Larry Reusch, brother in law E. Bruce Zahn and sister in law Lorraine Reusch. He leaves many nieces, nephews, cousins and friends. The family is grateful for the care provided to Jim by Home Health VNA/Merrimack Valley Hospice throughout these last several months. Arrangements: Friends and family may call Sunday June 23rd from 4:00 p.m. to 8:00 p.m. at John Breen Memorial Funeral Home, 122 Amesbury St., Lawrence, MA. Funeral Mass to be held Monday June 24th at 11:30 a.m. at Star of the Sea Chapel, 140 North End Blvd, Salisbury, MA. PLEASE MEET AT THE CHURCH FOR THE FUNERAL MASS. Interment will be at a date to be determined. In lieu of flowers, donations may be made to Lawrence Fire Department Scholarship Fund, PO Box 533, Lawrence, MA 01941; Home Health VNA/Merrimack Valley Hospice, 360 Merrimack St., Bldg. 9, Lawrence, MA 01843; or the Salisbury Beach Betterment Association Scholarship Fund; PO Box 5508 Salisbury, MA 01952. www.breenfuneralhome.com.

James Andrew Reusch, 83, of Salisbury, MA a proud Veteran of the United States Air Force, formerly of Lawrence, passed away peacefully at his home on June 20, 2019. He was born in Lawrence to the late Augustine and Mary (Batts) Reusch. Growing... View Obituary & Service Information

The family of James Andrew Reusch created this Life Tributes page to make it easy to share your memories.

James Andrew Reusch, 83, of Salisbury, MA a proud Veteran of...

Send flowers to the Reusch family.