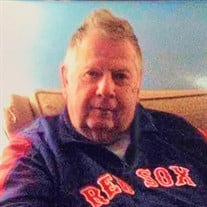 James A. Keleher, Jr., born on August 20, 1938, beloved husband of Arlene R.(Whitney) Keleher, passed away on Sunday, September 20, 2020 at home. Raised in Methuen and Lawrence, MA, he was the son of James A. Keleher, Sr., and Anna C. (Burke) Keleher. He graduated from Central Catholic High School, in 1955. James served in the U.S. Army while being stationed in Berlin, Germany, from 1961 to 1964. After serving, he was a lifelong employee of Honeywell in Lawrence as a stockman. He had many hobbies including photography, golfing, and going to the beach. He loved sports especially wrestling, the Red Sox, and Bruins. He was also a devoted fan of Central Catholic football and basketball, where he attended many games with his lifelong friend Walter W. White, III, and his godson Brian Keleher. In addition to his wife, James leaves behind his four children, Patricia and son-in-law Eric of Haverhill, John of Lawrence, Tim and fiancée Angela of Methuen, and Julie, also of Methuen, as well As his brothers Dan and wife Nina, Of Salem, NH., and Eddie and wife Glenna, of Methuen, three grandchildren, as well as many nieces and nephews. His feline companion Jackson will especially miss him dearly. Relatives and friends may call on Wednesday, September 23rd, 2020 from 4:00 p.m. to 6:00 p.m. at the John Breen Memorial Funeral Home, Inc., 122 Amesbury Street, Lawrence, MA. Due to Covid-19 we ask that everyone wear a mask in the funeral home, please keep social distancing in mind and the restrictions are for 25 people in the funeral home at one time. His funeral mass will be celebrated on Thursday, September 24th, 2020 at 11:00 a.m. in Saint Monica's Church in Methuen, MA. and burial will follow in the Elmwood Cemetery also in Methuen, MA.

The family of James A. Keleher Jr. created this Life Tributes page to make it easy to share your memories.

Send flowers to the Keleher family.