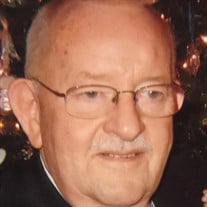 James “Jim” G. Sheehan, proud life-long resident of the Merrimack Valley and beloved husband of Germaine “Geri” B. (Sirois) Sheehan, passed away peacefully on November 17, 2020. He was 82 years of age. Born in 1938 and raised in Lawrence, Jim was the adored first-generation American son of the late Patrick J. and Ellen V. (Hanifin) Sheehan, both of Ireland. Jim attended St. Patrick’s Elementary School and Central Catholic High School surrounded by a tightly-knit community of extended family and many friends. After graduating, he enlisted in the United States Army, and ultimately served as a cryptographer in the U.S. Army Security Agency in Germany. Upon returning home in 1960 he married Geri, the love of his life, and thereby happily joined the very large and loving Sirois clan. This devoted couple would have celebrated 60 years together this week. Jim will be kept alive in the vivid and fond memories of Geri, their four children and their spouses, and nine grandchildren, each of whom he loved and greatly admired. His deep appreciation for the extraordinary blessing of family extended to his numerous in-laws, nephews and nieces, especially Susan Sirois, who generously gave her love and support to Jim during his later years. Many other people also will remember Jim as a gentle, strong, decent, gregarious and dependable friend, perhaps none more so than his co-workers during his 38-year career with Massachusetts Electric-National Grid. The family thanks these brothers and sisters for their companionship to Jim. Jim was predeceased by his parents Patrick and Ellen, and his brother John. He is survived by immediate family including daughter Nancy E. Gardner and her husband Dr. Gregory L. Gardner of Chelmsford, Mass.; daughter Colleen J. Alper and her husband Jay S. Alper of Atkinson, N.H.; son Patrick J. Sheehan and his wife Andrea M. Sheehan of Bradford, Mass.; son James M. Sheehan and wife Eileen C. Sheehan of Pepperell, Mass.; and grandchildren Leigha A., Gregory L. (III) and Abaigeal E. Gardner; Cailee J., Lucas J. and Shannon L. Alper; Patrick A. and Meg E. Sheehan; and Finn P.J. Sheehan. The immediate family will celebrate Jim’s life at a private memorial Mass and private burial. The family will announce a memorial celebration to include extended family and friends at a later date. In lieu of flowers, the family asks for donations to be made in memory of Jim to St. Jude Children’s Research Hospital. To send an online condolence, please go to www.breenfuneralhome.com.

The family of James "Jim" G. Sheehan created this Life Tributes page to make it easy to share your memories.

Send flowers to the Sheehan family.