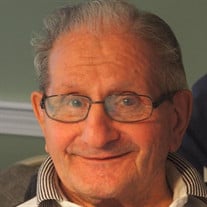 James J. Hajj, 97, of Methuen, MA. passed away peacefully on Thursday, September 20th, 2018 at his home surrounded by his Loving Family. James was born August 30, 1921 in Lawrence, MA., the son of the late John and Mary (Kanan) Hajj. James was raised and educated in Lawrence, MA. He was an Army Veteran of World War II serving over seas in Europe. James enjoyed playing 45's and was an avid sports fan. His ultimate pleasure was spending time with his family and friends, especially his grandchildren and great grandchildren. James was predeceased by his wife Margaret (Mackour) Hajj He is survived by his son Jeffrey Hajj and his wife Tina Hajj of Methuen, MA son James Hajj and his wife Alison of Methuen, MA Daughters Beverly Harvey and her late husband Steven of Methuen whom James resided., Brenda Giantonio and her husband Ron of Methuen, MA and Karen Pelletier and husband Alan of Haverhill, MA He leaves behind two sisters Effie Saba and Emily Grasso and his brother-in-law Ernest Mackour James is predeceased by his brothers Manny, Charles, George, and Thomas, and his sisters Genevieve, Adele and Helen. James was a life long parishioner of Saint Anthony's Church in Lawrence, MA., He was a member of the Lawrence Elks and the Knights of Columbus. Relatives and friends may call on Sunday, September 23rd, 2018 from 3:00 pm to 7:00 p.m. at the John Breen Memorial Funeral Home, Inc., 122 Amesbury Street, Lawrence, MA. His funeral mass will be celebrated on Monday, September 24th, 2018 at 10:30 a.m. in Saint Anthony's Maronite Church, 145 Amesbury Street, Lawrence, MA. Burial will follow in Saint Anthony's Cemetery in Methuen, MA. In Lieu of Flowers contributions may be made to a charity of One's Choice. For online condolences and other information please visit us at www.breenfuneralhome.com.

James J. Hajj, 97, of Methuen, MA. passed away peacefully on Thursday, September 20th, 2018 at his home surrounded by his Loving Family. James was born August 30, 1921 in Lawrence, MA., the son of the late John and Mary (Kanan) Hajj. James... View Obituary & Service Information

The family of James J. Hajj created this Life Tributes page to make it easy to share your memories.

Send flowers to the Hajj family.