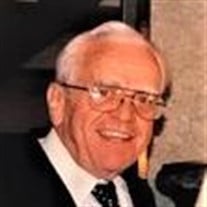 James E. Griffin January 20, 1931 – August 10, 2018 It is with great sadness that the family of James E. Griffin announces his passing after battling cancer on Friday, August 10, 2018, at the age of 87 years. Jim was born in Lawrence, on January 20, 1931,the son of Edward and Eugenie (Beaudoin) (Damphousse) Griffin. Jim will be lovingly remembered by his wife of 62 years Mary Gertrude (Lefrancois) Griffin and his daughters, Susan Griffin of Lawrence, Colleen GriffinPort and her husband Stephen Port of Eastham, Donna Brien and her husband Matthew of Lawrence. Two grandchildren, Cameron Griffin Brien, and Casey Rose Brien. Born and raised in Lawrence, and a lifelong resident, Jim graduated from Central Catholic High School in 1947. He was a supervisor for the New England Telephone Co. when he retired after thirty years in 1986. Jim loved to work with wood, everything from building two houses and most of the furniture in them, a 22 foot schooner, to carving figurines and a two and half foot bear. Upon retirement, Jim volunteered at the Greater Lawrence Community Boating Program, where learned to sail and became an instructor. He spent much time there building things and repairing boats, motors, plumbing, electrical, “everything”. He sailed often and enjoyed sailing on the Merrimack River with his grandson Cameron and friends. During the Korean War, Jim enlisted in the Army Security Agency and served honorably in Frankfurt Germany where he reached the rank of Sargent. As a member of the St. Patrick’s men’s club, he performed as a comic in many shows, and marched in parades with the Emmett Kelly Clown Group, including several Boston St. Patrick‘s day parades. Jim is pre-deceased by his family members Annette (Damphousse) Blanchette, Roland Damphousse, Irene (Damphousse) Parent, Raymond Damphousse, Rene Damphousse, Gertrude (Damphousse) Taylor, and Richard Griffin. Visiting hours will be held from 4 to 7 pm on Wednesday August 15, 2018 at the John Breen Memorial Funeral Home, 122 Amesbury Street, Lawrence, MA. 01841. A Mass of Christian burial will be celebrated at 11 AM on Thursday August 16, 2018 at St. Patrick's Church, 118 So. Broadway Lawrence, MA. All are invited to PLEASE MEET AT CHURCH. Burial will follow at Sacred Heart Cemetery, Andover, MA. IN LIEU OF FLOWERS donations may be made to the Greater Lawrence Community Boating Program, PO Box 955, Lawrence, MA 01842. For online condolences and other information please visit us at www.breenfuneralhome.com.

The family of James E. Griffin created this Life Tributes page to make it easy to share your memories.

Send flowers to the Griffin family.