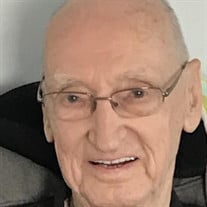 James W. Daly, 90, a resident of North Andover, died peacefully at home on May 16, 2020. Jim was born and raised in Andover, the son of the late Francis and Vera Daly. Jim graduated from Central Catholic High School, class of 1947. Following graduation, he joined the US Army and served at the Pentagon as a Cryptographic Technician and was recognized as an M-1 Rifle Sharpshooter. He continued in service to his country as a member of the National Guard. Following discharge, Jim began his 45-year employment at James W. Daly Wholesale Drug Co. in Lawrence, MA. He was an active member and Cub Scout Master at St. Laurence O’Toole Parish while living in Lawrence and joined St. Michael Parish upon moving to North Andover in 1984. He was pre-deceased by his wife of 42-years, Ann M. (Calnan) Daly, his sister Margaret Roth, and brother-in-law William Godden. He is survived by his sister Patricia Godden of North Andover and brother-in-law Carl Roth of New York, two daughters Maureen Blouin (husband Robert) of North Carolina and Kathleen Driscoll (husband William) of North Andover, and a son James W. Daly Jr. of Methuen. “Gramps” thoroughly enjoyed spending time with his five grandchildren, Colleen Blouin Chaney (husband J.D.), Keith Driscoll (wife Nichole), Ryan Daly (wife Yadira), Daniel Blouin (wife Jamie) and Scott Driscoll (wife Samantha). He was also blessed with eight great grandchildren. His life was enriched, by traveling with his wife and their fun-loving friends. Jim was known for his quick wit and ability to sing an Irish song or two. His Boogie-Woogie piano playing skills were always a big hit at gatherings of family and friends. In addition, he was a member of the Lawrence Elks, an avid golfer, pool enthusiast, woodworker, and 45s card player. He enjoyed following the Patriots and Red Sox, but his true passion was watching his grandchildren play sports. He was frequently seen at North Andover Knights’ sporting events where he was affectionately known to all in attendance as “Gramps.” In lieu of flowers the family requests that memorial donations be made to St. Michael Parish, 196 Main St. North Andover, MA 01845 or to the charity of your choice. During this time of social distancing all services will be private. For more information or to leave an online condolence visit https://www.breenfuneralhome.com.

James W. Daly, 90, a resident of North Andover, died peacefully at home on May 16, 2020. Jim was born and raised in Andover, the son of the late Francis and Vera Daly. Jim graduated from Central Catholic High School, class of 1947. Following... View Obituary & Service Information

The family of James W. Daly created this Life Tributes page to make it easy to share your memories.

Send flowers to the Daly family.