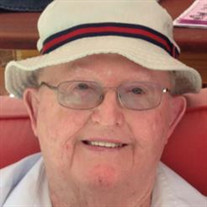 James T. Byron Sr. passed away at home in his “castle on the hill”, to join the love of his life on November 2, 2021. Jim was a native Lawrencian He was born to Joseph and Catherine Byron on February 21, 1927. At 16 years old, he met his best friend and future wife, Betty Borrelli. He served in the U.S. Army, stationed in Germany, during World War II. Upon his return, Jim and Betty married and began their future together raising their four children. Jim was employed by the City of Lawrence for 32 years, working as the Caretaker for the South Lawrence Common for many years before his retirement in 1987. Jim had strong religious beliefs and was a parishioner of St. Mary of the Assumption Church in Lawrence. He was a devoted family man, enjoying the many family gatherings throughout his years, many of which were held at family homes or on trips to St. Petersburg, Fl, and Lake Winnipesaukee, N.H. Jim was predeceased in 2015 by his wife Elizabeth (Borrelli) Byron; as well as his three brothers, Joseph (and wife Mary), Thomas (and wife Adeline) and Michael Byron. Jim leaves his four children: James T. Byron, Jr. and wife Grace (Petralia) of Epsom, NH, Thomas M. Byron and wife Raylene (Francis) of Greenbush, ME, Catherine (Byron) Sacco and husband Richard of Englewood, Fl, and Elizabeth (Betty) Byron of Lawrence, MA with whom he resided. He was the proud Grandfather of 11 Grandchildren, 19 Great Grandchildren and 3 Great-Great Grandchildren. He also leaves his sister-in-law Joan Byron as well as many nieces/nephews, extended family and friends. He will be deeply missed and lovingly remembered by all who knew him. At the family's request, masks are STRONGLY REQUESTED and will be GREATLY APPRECIATED.

The family of James T. Byron Sr. created this Life Tributes page to make it easy to share your memories.

James T. Byron Sr. passed away at home in his “castle on the...

Send flowers to the Byron family.