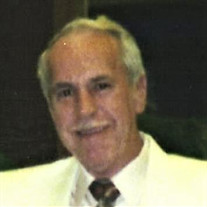 James Robert Battles, 85, of Methuen, Massachusetts passed away on Sunday, February 3, 2019 at the Methuen Village in Methuen. James was born in Methuen on February 28th, 1933 to the late James and Blanche Battles. He was educated in the Methuen Schools and then served in the United States Navy. James worked as an Associate Engineer with several Government and Private Firms, he retired after a 33 year career at the time he was working for B.A.E. He was a member of the Derry/Salem Elks and was a lifelong avid hunter and muzzle loader, and was also a diehard Red Sox Fan. James was predeceased by his beloved wife Janice (Lemieux) Battles, his infant grandson Todd Battles and his brother William Battles He is survived by his Daughters: Cynthia Grella and her husband Tim of Salem, NH. Cheryl Lachance and her husband Phil of Salem, NH Deborah Beal and her husband Robert of Windham, NH His son Todd Battles of Plymouth, MA. His brother Richard Battles of Florida as well as 11 Grandchildren, 21 Great Grandchildren and 2 Great great Grandchildren. And his nephew Christopher Battles and his wife Erin and their two sons of Londonderry, NH. Relatives and friends are cordially invited to call on Wednesday, February 6, 2019 from 10:00 a.m. to 12:00 Noon at the John Breen Memorial Funeral Home, Inc., 122 Amesbury Street, Lawrence, MA. His funeral services will be held at 12:00 Noon following the calling hours. Burial will follow in the Pine Grove Cemetery in Salem, NH. For online condolences and other information please visit us at www.breenfuneralhome.com. Memorial Contributions may be made in James’s name to the Massachusetts Veterans Association, 600 Washington Street, 7th Floor, Boston, MA 02111 and to the Wounded Warrior Project, PO Box 758517, Topeka, Kansas 66675-8517.

James Robert Battles, 85, of Methuen, Massachusetts passed away on Sunday, February 3, 2019 at the Methuen Village in Methuen. James was born in Methuen on February 28th, 1933 to the late James and Blanche Battles. He was educated in the Methuen... View Obituary & Service Information

The family of James Robert Battles created this Life Tributes page to make it easy to share your memories.

Send flowers to the Battles family.