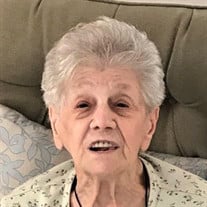 North Andover - (Hilda Marie) Ree Drass Fournier, 95, of North Andover passed away on March 17, 2019 surrounded by her family at Henry C. Nevins Home in Methuen. She was born on November 4, 1923 in Hollidaysburg, PA, daughter to John and Wilhelmina Drass. Ree was a graduate of Hollidaysburg High School. She spent her early years as a clerk for the government in Washington, D.C. She and her husband (Edward) Ronald Fournier moved to Lawrence in 1957. In addition to raising five children, Ree assisted her husband in operating their R and R Flower shop, even driving the delivery van. Ree was devoted to her children and family, enjoyed cooking and having large gatherings, and was an avid football fan. After her son Joey’s death in 1974 she became an active member of the National Parents of Murdered Children and served on the board of the Joey Fournier Services, a non-profit, which provides violence prevention after-school programs for the children in Lawrence. Ree’s infectious smile and sweet personality endeared her to everyone. In addition to her son, Joseph (Joey), she was predeceased by her husband (Edward) Ronald Fournier; sisters Bernadine Pennell and Helen Richards; and brothers John, Eugene, Thomas, Joseph, and Lawrence Drass. She leaves her brother (Matthew) Pete Drass of Phoenix Arizona; daughter Donna Marie Cuomo and her husband Robert of N. Andover; daughter Celeste, and her husband Philip Decubellis of Methuen; son Michael of Salem, N.H., son James and his partner Paul Favreau of Boston; grandchildren Mark Cuomo and his wife Jacqueline, Cheryle Halcarz and her fiancé Neil Stallings, Sharon Bradley and her husband Thomas, Rachel Cuomo and her fiancé John Mullin, and Jamie Juffre and her husband Christopher; great-grandchildren, Alexandria, Anthony, Joseph, Ryan, Jillian, Thomas, and Nathan; and devoted neighbor and friend Robert Ripa. The family is grateful to the Henry C. Nevin’s Home for the care provided to Ree during her time there. In lieu of flowers, donations can be made in memory of Ree to The Joey Fournier Services, 11 Union Street, Lawrence, MA 01840. Relatives and friends are respectfully invited to attend visiting hours Thursday, March 21, 2019 from 4:00-8:00PM at the John Breen Memorial Funeral Home, 35 Merrimack St., N. Andover. A funeral mass will be held Friday, March 22, 2019 at 11:30AM at St. Michael’s Church, 196 Main St., N. Andover.

North Andover - (Hilda Marie) Ree Drass Fournier, 95, of North Andover passed away on March 17, 2019 surrounded by her family at Henry C. Nevins Home in Methuen. She was born on November 4, 1923 in Hollidaysburg, PA, daughter to John and Wilhelmina... View Obituary & Service Information

The family of (Hilda Marie) Ree Drass Fournier created this Life Tributes page to make it easy to share your memories.

Send flowers to the Fournier family.