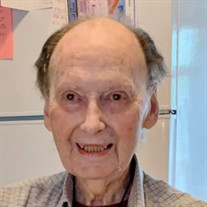 It is with great sadness and heavy hearts, the Lawrence Veterans Service Office shares that on December 1, 2020, the City of Lawrence lost a National treasure, a WWll Hero, fellow brother in arms and a dear friend, Mr. Herman Leo Bazin. Mr. Basin was a life-long Lawrencian, who’s kind, caring and spunky personality is truly going to be missed by those closest to him. It was a true honor, and privilege to participate in the intimate motorcade, escorted by the Rolling Thunder and Lawrence Police and Fire Departments, from the Bedford VA to the Breen Funeral Home to bring Mr. Bazin home one last time. Herman was born and lived on Oxford Street then moved to 173 Sylvester Street, Lawrence. In the 1940s the family moved to 32 Newton Street and then to 11 Brookfield Street. Herman attended Sacred Heart Grammar School, then continuing to Lawrence High school, graduating in 1943. Herman was drafted to the Army July 30th, 1943. Herman was the gunner in a tank company. He was in the 7th tank destroyer group, 5th Corp, Eastern Theater of Operations. He was also a radio operator. A Member of the battle of the bulge – bassoon he received the good conduct medal, and the European African middle Eastern Theater campaign ribbon, the Victory medal serving under General Patton. Returning home he received a degree in chemistry from Northeastern University. He worked as a handy man for many years and was never married, Herman loved Classical Music and lived with his sister and brother-in-law for many years. He is survived by his God daughter Donna Bazin Giles of Sandy Hook, Connecticut, her husband Steve and there 3 children Clark, Melissa and Curtis Giles. Herman was predeceased by his father and mother Ralph and Roseanna (Bouchard)- Bazin, his older Sister – Lucille (Bazin) Barby and his Brother-in-law – Peter Barby Please join us at the Bellevue Cemetery on December 14th at 11 am, where we will bring Mr. Bazin so he can rest in eternal peace. We salute you our dear friend, you will be truly missed. Arrangements are under the direction of the John Breen Memorial Funeral Home, Inc., 122 Amesbury Street, Lawrence, MA. www.breenfuneralhome.com.

It is with great sadness and heavy hearts, the Lawrence Veterans Service Office shares that on December 1, 2020, the City of Lawrence lost a National treasure, a WWll Hero, fellow brother in arms and a dear friend, Mr. Herman Leo Bazin. Mr.... View Obituary & Service Information

The family of Herman Leo Bazin created this Life Tributes page to make it easy to share your memories.

It is with great sadness and heavy hearts, the Lawrence Veterans...

Send flowers to the Bazin family.