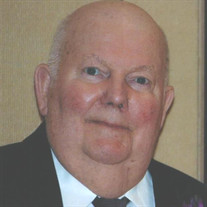 Henry “Hank” R. LaValley, 87, a resident of the Sutton Hill Nursing Center in North Andover, MA, passed away on Sunday, September 2, 2018 at the Nursing Home. Born in Lawrence, MA to the late Henry J. and Alberta (Trudeau) LaValley, Hank was educated in Lawrence and was a graduate of Central Catholic High School. He had served in the United States Air Force during the Korean Conflict. Hank retired from the Gillette Company in 1998 after 30 years. Prior to Gillette, Hank had worked for the Frank C. Meyers Box Company where he met his wife Rolande. Hank was an avid 45’s player and was very good at it. He loved the Boston Red Sox and the New England Patriots. Hank also loved going to Rockingham Park in Salem, NH. He was very proud to be in this country. The husband of the late Rolande (Derosiers) LaValley, members of Hank’s family include his daughters Kathleen T. McLaughlin of Methuen, MA and Sharon Madensky of Lawrence, MA. He is also survived by 13 grandchildren, 17 great grandchildren, 4 great-great grandchildren and several nieces, nephews, grandnieces, grandnephews, and great grandnieces and great grandnephews. Hank was father to the late Jerry Murphy and John Murphy as well as brother to the late Robert LaValley. Relatives and friends are invited to call on Wednesday, September 12, 2018 from 10:00 A.M. to 11:00 A.M. at the John Breen Memorial Funeral Home, Inc., 122 Amesbury St., Lawrence, MA. A Funeral service will be held at 11:00 A.M. in the funeral home. Burial with Military Honors will follow in the Holy Sepulchre Cemetery in North Andover, MA. Memorial contributions may be made in Hank’s name to the Alzheimer’s Association, 309 Waverly Oaks Rd., Waltham, MA, 02452. To send an online condolence or for more information, please go to www.breenfuneralhome.com.

The family of Mr. Henry R. "Hank" LaValley created this Life Tributes page to make it easy to share your memories.

Send flowers to the LaValley family.