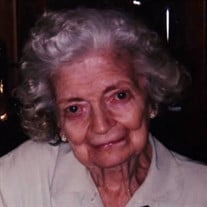 Helen F. (Powers) Dobeck, 101, a resident of Methuen, Mass., passed away peacefully on Wednesday, October 18, 2017, at the Nevins Nursing and Rehabilitation Center with her loving family by her side. Helen was born in Lawrence on October 1, 1916, she was the daughter of the late James H. and Helen (Moynihan) Powers. Helen was a graduate of both St. Mary's Grammar School and High School, as well as the New England School of Dental Assistance in Boston. Helen was a homemaker until she went to work at the Internal Revenue Service. She was a member of the St. Rita's Guild, as well as an officer in the St. Mary's Alumni Association. She chaperoned all the C.Y.O. Activities at St. Mary's during the 1960s. Helen was a beautiful seamstress and loved to crotchet. She was an avid reader and a devoted Red Sox fan. She was the widow of Charles R. Dobeck to whom she was married for 58 years until his death in 1998, and was preceded in death by all of her siblings. Helen's family include her daughters, Frances M. Damon and her husband, G. Fred of North Reading, Mass., and Justine M. Dobeck of Methuen, Mass. She is also survived by her son, Charles W. Dobeck and his wife, Bonnie of Fort Myers, Fla. She is also survived by several grandchildren and great-grandchildren, as well as several nieces, nephews, grand nieces and grand nephews, and great grand nieces and great grand nephews. The family would like to express their thanks to all her care givers at the Nevins Nursing and Rehabilitation Center, she was given the best care any family could ask for. Relatives and friends are invited to call on Sunday, October 22nd, 2017 from 1:00 P.M. to 5:00 P.M. at the John Breen Memorial Funeral Home, Inc., 122 Amesbury Street, Lawrence, MA. Her funeral mass will be celebrated on Monday, October 23rd, 2017 at 11:00 a.m. Saint Monica's Church, 212 Lawrence St., Methuen, MA. Burial will follow in the Immaculate Conception Cemetery in Lawrence, MA. For online condolences and other information please visit us at www.breenfuneralhome.com. Memorial Contributions may be made in Helen’s name to either the Nevins Nursing and Rehabilitation Center, Ten Ingalls Court, Methuen, MA, 01844, or to St. Jude’s Children’s Research Hospital, 501 St. Jude Place, Memphis, TN, 38105.

Helen F. (Powers) Dobeck, 101, a resident of Methuen, Mass., passed away peacefully on Wednesday, October 18, 2017, at the Nevins Nursing and Rehabilitation Center with her loving family by her side. Helen was born in Lawrence on October 1,... View Obituary & Service Information

The family of Mrs. Helen F. Dobeck created this Life Tributes page to make it easy to share your memories.

Send flowers to the Dobeck family.