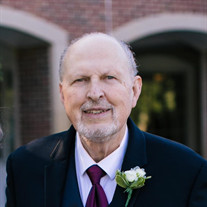 Dr. Hartmut Hans Legner of North Andover died on Saturday, December 12 at Beth Israel Deaconess Medical Center due to complications of Covid-19 while undergoing treatment for Non-Hodgkin's Lymphoma. He was 76 years old. Born in East Prussia during World War II, Hart immigrated with his parents to the United States, settling in Floral Park and then Queens Village, NY. He earned a B.S. in aeronautical engineering and a M.S. in astronautics from the Polytechnic Institute of Brooklyn. In 1971, Hart earned his Ph.D. from Stanford University. He previously resided in Huntington Beach, CA and Marblehead, MA. Hart is survived by his wife of42 years, Lucille M. Legner, his mother, Christel Legner of Methuen, his son, Matthew H. Legner and his wife Sandra of Chester. NH, daughter Christianna J. McCann and her husband Ryan of Acton, MA, stepson Richard M. Bentley and his wife Tammy of Salem, NH, and stepdaughter Andrea Bentley-Melle and her husband Justin of Amherst, NH as well as his grandchildren Autumn, Hazel, Gavin, Rowen and Lauren. He was preceded in death by his father Hans Legner. Hart's family is grateful to Dr. Weinstock, Dr. Wong, Ross Cromwell, RN and Hart's BIDMC medical team who respectfully nicknamed him their "rocket scientist" and delivered exemplary compassionate care in the last weeks of his life. Most recently Hart worked for Blaze Tech Engineering consultants in Woburn and SURVICE Engineering in Dayton. OH. He previously was a Principal Scientist at Physical Sciences Inc, Andover. worked at AVCO Everett Research Laboratory. and TR W' Inc. in Redondo Beach. CA. with publications in the Journal of Fluid Mechanics and the Journal of Engineering Mathematics. His research included fundamental shear-flow turbulence. stability of jets and wakes. and basic boundary-layer theory. Additionally he contributed to various laser-related fluid dynamics research projects including the design of high-energy cw subsonic C02 lasers. laser propulsion, acoustic suppression in laser cavities, and laser aerodynamic windows. Specialization included shock-wave/boundary-layer interaction studies and in boundary-layer transition phenomena. He was a member of the American Institute of Aeronautics and Astronautics as well as several honor societies including Sigma Gamma Tau, TauBeta Pi, and Sigma Xi. The community of Faith Lutheran Church in Andover was a second home to Hart where he served on Church Council and Was a Sunday school teacher. Hart was also a huge fan of New England sports teams. often listening intently to games on WEEI. whether in the car, on his headset as he gardened or via portable radio while enthusiastically giving updates and cheering loudly when the Red Sox or Patriots scored. Though Hart was a passionate sports fan and dedicated to his lifelong purpose as a scientist, his family and his faith came first. His humility would never allow for recognition or for him to pat himself on the back, though he certainly has earned the respect, praise and celebration for his many accomplishments and a life well lived. Hart will be remembered as a visionary, a truly brilliant, kind, caring and altruistic son, husband, father, and grandpa. Services and interment will be private with arrangements made by John Breen Memorial Funeral Home, North Andover. Funeral services can be viewed via Zoom on Sunday, December 20, 2020 at 4:00PM at: https://zoom.us/j/96757237750?pwd=TitDYWZlM0hNSmNyYjNueE9URnF2UT09 Meeting ID: 967 5723 7750 Passcode: 241634 Join by phone: +16465588656,,96757237750#,,,,,,0#,,241634#

The family of Hartmut H. Legner created this Life Tributes page to make it easy to share your memories.

Send flowers to the Legner family.