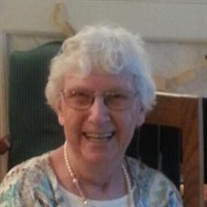 Geraldine “Gerry” (Casey) Nartiff, 85, of Georgetown MA, formerly of Lawrence, passed away peacefully on August 21st, 2021. She was born in Lawrence on August 13, 1936, to the late Frank and Mary Casey. Gerry graduated from St. Mary’s High School in 1954 and Northern Essex Community College and attended Emmanuel College. After college, Gerry worked for many years as a switchboard operator at the former New England Telephone Company and Holy Family Hospital. In her later years, she worked for Head Start in Lawrence and Fidelity House. In her retirement, Gerry enjoyed spending her time with family and friends. She could be seen frequenting Salisbury Beach to enjoy fried clams and a day at the arcade. Gerry loved to bowl, and adored her Thursday’s bowling with the “Pin-Up Ladies.” Gerry is survived by her four children, daughters, Ellen Nartiff, Noreen Su and her husband Julio, Nancy Reusch and her husband Michael, and one son James Nartiff and his wife Corrie. Fourteen grandchildren; Eloy and his wife Pauline, Ysolina, and Justine Su; Zachary Nartiff and Kayla (Nartiff) Jackson, Jessica and Christopher Reusch; Hailey, Allison, Katelyn, and Ryan Nartiff. One great-grandchild Javan Su. In addition, she is survived by her two sisters; Bernadine Coburn and Midge Gibbons, and many dear nieces and nephews. The family would like to extend a heartfelt thank you to the Anna Jaques Cancer Center, Elder Services of Merrimack Valley, and her dedicated homemaker Rebecca Aldrich, Merrimack Valley Hospice House, and Country Center for Health & Rehabilitation for their continued care and support throughout this last year.

The family of Geraldine "Gerry" (Casey) Nartiff created this Life Tributes page to make it easy to share your memories.

Send flowers to the Nartiff family.