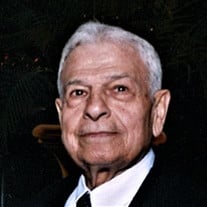 Dr. George J. Mansour, 98, of Lawrence, MA, died peacefully surrounded by his loving family on December 23, 2017 after a brief illness. He was born in Lawrence, MA, the son of the late Isaiah and Katoum (Nohra) Mansour. He graduated from Lawrence High School in 1937. He continued his education, earning a Bachelor of Arts degree from St. Anselm's College in 1942. He attended medical school during WWII at Georgetown University School of Medicine in Washington, D.C. graduating in 3 years in 1945. George served in the United States Navy as a Lt. Jr. grade naval officer. He interned at Chelsea Naval Hospital from June 1945 to June 1946. He was then assigned to the U.S. Marines to the First Special Marine Brigade, at Camp Lejeune in North Carolina and Quantico Marine Base in Quantico, VA. He returned to Boston to the Atlantic Reserve Fleet at the South Boston Navy Yard for one year. He was then transferred to Norfolk Naval Air Station where he remained until he was discharged in March 1948. He later received post graduate training at Tufts New England Medical Center. In September 1948, Dr. Mansour established a solo medical practice in Lawrence, which consisted of general medicine, obstetrics, minor surgery, visiting nursing homes and making house calls. He was an active member of the staff at the Bon Secours/Holy Family Hospital, Lawrence General Hospital, and the former Clover Hill Hospital. In addition to his busy medical practice, Dr. Mansour was a school physician for the city of Lawrence from 1960 to 1979. In 1977, he was honored by the International Institute of Greater Lawrence with the Immigrant City Award for his efforts to provide medical services to minorities. In 2000, he received the Community Clinician of the Year award in the Essex North District by the Massachusetts Medical Society. He served his community for nearly sixty years until his retirement in January 2007. He was always recognized and remembered fondly by the countless former patients he encountered. George was a man of strong Catholic faith as he exemplified in his life and instilled in his family. He was well read and knowledgeable in many subjects including history, politics and sports, especially the Boston Red Sox. He enjoyed being outside, taking walks in the neighborhood and tending to his vegetable garden, which he planted every year. His greatest joy and accomplishment, however, was his family, who will miss him dearly. George is survived by his beloved wife of 44 years, Joan (Kutovicz) Mansour; his three children, Janna Mansour of Lawrence, MA, Christopher Mansour, and his wife Allison, of Needham, MA, and Dr. Kari Mansour of Charlestown, MA; his precious grandchild Olivia Mansour, of Needham, MA, as well as his niece and nephews. He was predeceased by his brothers, Joseph and Thomas Mansour. Relatives and friends are respectfully invited to his funeral mass to be offered on Friday, December 29, 2017 at 11:30 am at St Anthony's Maronite Church, 145 Amesbury St, Lawrence, MA 01841. Calling hours and burial are private at his request. Donations may be made to the charity of one's choice.

Dr. George J. Mansour, 98, of Lawrence, MA, died peacefully surrounded by his loving family on December 23, 2017 after a brief illness. He was born in Lawrence, MA, the son of the late Isaiah and Katoum (Nohra) Mansour. He graduated from Lawrence... View Obituary & Service Information

The family of Dr. George Mansour created this Life Tributes page to make it easy to share your memories.

Send flowers to the Mansour family.