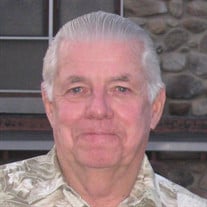 George Patrick Finn Jr. 79, a resident of Salem, passed away on Friday, July 13, 2018, surrounded by his family after a courageous battle with pulmonary fibrosis. It is with great sadness that we announce the passing of the patriarch of our family. George was born in Boston, MA on March 26, 1939, the oldest of three siblings to Anna (Catarius) and George Finn Sr. He has been a resident of Salem, NH for over fifty years. He was a wonderful husband, father, grandfather, and friend. George retired after working 30 years for Western Union and was a member of the Salem Elks club. He was an avid sports fan and always watched the Patriots, Red Sox, and Celtics games. His favorite hobbies were to spend time fishing and hunting with his son and grandchildren at his camp in Hiram, Maine. George frequently visited Saydee’s Bar and Grill, where he made many memories with his closest friends who knew him as the silver fox. George was known to willingly open his home to all friends, many of whom called him papa. He will be greatly missed by all who knew and loved him, none more so than his family. George is survived by his loving wife of 60 years, Noreen (Kopp) Finn, and his sister Patricia (Finn) McCormick, and predeceased by his brother Frank Finn. He is survived by his daughters Lori Magee and husband Dave, Jeanne Curtin and husband Jack, son George Finn III and wife Julie, and predeceased by his daughter Debbie Nichols. He lovingly raised his grandchildren Johny, Michael, Nicole, and Ryan as his own. He also leaves behind twelve grandchildren, eleven great-grandchildren, and countless friends. Family and friends are invited to visit Thursday from 4:00 PM to 7:00 PM at the John Breen Memorial Funeral Home, Inc. 122 Amesbury St. Lawrence, MA. 01841. A celebration of life will be held at a later date and more information will be announced. Memorial contributions may be made in George’s name to the High Pointe House, 360 North Avenue, Haverhill, MA., 01830. To send an online condolence or for more information, please go to www.breenfuneralhome.com.

George Patrick Finn Jr. 79, a resident of Salem, passed away on Friday, July 13, 2018, surrounded by his family after a courageous battle with pulmonary fibrosis. It is with great sadness that we announce the passing of the patriarch of... View Obituary & Service Information

The family of George Patrick Finn Jr. created this Life Tributes page to make it easy to share your memories.

George Patrick Finn Jr. 79, a resident of Salem, passed away...

Send flowers to the Finn family.