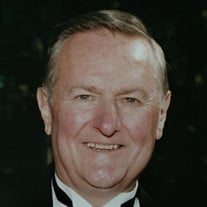 George A. Baker Jr., 82 of Methuen, MA passed away peacefully at his home on Saturday, Dec. 2, 2017, surrounded by his loving family. George A. Baker Jr., the son of the late George A. Baker, former Principal and Superintendent of the Essex County Training School, a rehabilitation facility for Lawrence area troubled youths, and the late Helen T. (nee Unick), Head Matron at the Training School. His parents were wonderful role models, dedicating themselves to helping those without the financial means to obtain needed educational and mental health services. Maternal grandmother Vincenza (nee Lovick) Unick cared for George Jr. along with maternal Uncle Peter Unick, George Jr.’s hero, who survived WWII. (US Army 1st Division, The Big Red Machine, North Africa, Sicily and Normandy - DDay). George graduated from Lawrence High School in 1953 and was an altar boy in his youth at St. Lawrence O’Toole’s. George participated in Cross Country and Basketball and lettered in Track and Field where his specialty was the high jump. He received a Bachelor of Arts in Sociology from Bates College, Lewiston, ME in 1957. George earned a Masters Degree in Social Work from Boston College in 1961. While at BC, George participated in a casework internship where he was introduced to his future wife Gloria. In his professional career, George was a Probation Officer for the District Court of Lawrence for 10 years. He was assigned primarily to juvenile boys’ cases. He received tremendous support over the years from Honorable Judges John Darcy, Paul Perocchi and Joseph Bacigalupo. His passion for working with youth of Lawrence led him to develop many programs using individual and group therapy with an emphasis on character building. He lived his father’s creed of “It is better to build boys than to mend men.” George began the next phase of his career at the Bon Secours Hospital (now Holy Family) in 1969 as a Social Worker and Social Services Director through his retirement 30 years later. George was on numerous human services committees for social work, mental health, drug addiction and special needs- including serving as President of the Greater Lawrence Mental Health and Mental Retardation Area Board in 1971-1972. George was an avid professional and Boston College sports fan. He especially enjoyed his children’s and grandchildren’s sports endeavors. He was a man of discipline, integrity, and great faith. His life-long love of animals, large and small, was instilled in his children. Sometimes unappreciated was his keen sense of humor and sarcasm – something his family and friends found both entertaining and endearing. George is predeceased by his beautiful bride, Gloria Ann (nee Mills) to whom he was married for two weeks shy of 45 years. He is survived by his sister, Joan E. Chase, of Methuen, and his six children including son George III and his wife Maria (nee Arias), George III’s former wife, Carol (nee Brandolini), son Andrew and his wife Joanne (nee Contarino), daughters Beth Baker and her companion Joseph Lavalle, Monica Ratkovich and her husband Tom, son Jeffrey and his wife Wendy (nee Pietrek) and daughter Dawn Getchell and her husband Leonard. George Jr. is also survived by his maternal nephew and nieces Brett Philbrick, Holly (nee Philbrick) Carter and Renee (nee Philbrick) Davis as well as paternal nephews and niece Brian, Michael and Wendy Chase. George Jr. is survived by his grandchildren, Allison, Michael, Sarah, Julie, Jillian, Lindsay, Grant and Erin, step grandchildren Stephen and Joshua Abreu, Stephen and Jessica Ratkovich as well as seven great-grandchildren Brandon, Rosabella, Ryan, Connor, Sky, Luna and Kendall. He was predeceased by life-long friends Dr. Martin J. Melia (best man and friend since 9 years of age), Barbara and Jim Gallagher, and a longtime friend and professional mentor, Michael B. Cronin. The family would like to express appreciation to the talented medical community supporting their father in his most recent years including Dr. William Carlson and Natasha Lever NP (Mass Gen-Cardiology), Dr. Steven Lubitz (Mass Gen) and local physicians and their staff including Dr. Edmund Schiavoni Jr., Dr. Marc Nitzburg and Dr. Michael Landman. Family and friends may honor and remember George’s life by gathering for his calling hours on Tuesday, December 5th from 4pm-8pm at John Breen Memorial Funeral Home, 35 Merrimack St., North Andover, MA. His life will be celebrated at St. Lucy’s in Methuen, MA at 11am on Wed., Dec 6th followed by the entombment at the Immaculate Conception Mausoleum, Lawrence, MA. In lieu of flowers, memorial contributions would be greatly appreciated to MGH Heart Failure & Transplant Fund, c/o Dr. Carlson, 55 Fruit St, Bigelow 800, Boston, MA, 02114 in memory of George Baker Jr., or to the Juvenile Diabetes Research Foundation (JDRF), 60 Walnut Street, Wellesley, MA 02481 attn: Julie’s Walk Starz (online at http://www2.jdrf.org/goto/julieswalkstarz). If you prefer, please give to a charity of your own choosing or simply say a prayer for George’s soul.

The family of George A. Baker Jr. created this Life Tributes page to make it easy to share your memories.

George A. Baker Jr., 82 of Methuen, MA passed away peacefully...

Send flowers to the Baker family.