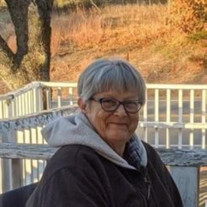 Gail Marie (Homan) Runninghawk, 72 of Plaistow, NH passed away on January 12, 2022 at the Holy Family Hospital in Haverhill, MA. Gail was born on the Passamaquoddy Indian reservation and orphaned as a toddler, then spent her adolescent days at the St. Michaels orphanage in Bangor Maine before meeting first husband Donald Stanley and having her first two sons John Stanley and Donald Stanley, Jr. while living in Somerville, and Lawrence, Massachusetts. In her early life she was known to everyone that knew her as a great singer and devoted friend. after her separation from Donald Stanley, Gail remained in Lawrence, Mass for most of her life. She worked part time at different jobs while being a homemaker and raising her son Thomas Stanley and was an avid bingo attendee. Later in life she met and married the love of her life Charles Runninghawk of South Dakota and subsequently moved there and married Charles where she lived for several years and took care of him and her beloved dog skittles. upon Charles passing, Gail moved back to Massachusetts and lived out her remaining years in North Andover and then Plaistow ,NH. with her son Thomas Stanley and his family. Gail was always known to be funny, helpful, loving and caring to anyone who crossed paths with her. She loved singing, fishing, bingo and her pets and was devoted to her family and would help you any way she could. she is and will be dearly missed by all those that knew her. Her family members include son Thomas Stanley and Fiance' Jenessa MacKenzie of Plaistown, son John Stanley and wife Brenda of Plaistow, son Donald (Scooby) Stanley, Jr. of Florida, granchildren Chelsea Stanley of Braintree, MA, Markus and Colten Stanley of Lawrence, MA Dylan and Paieghton Eaton of Plaistow, brothers Pinto, Lukey and David Homan, Arnold (Eagle) Francis, sister Peggy Pottle, stepchildren Cheri McCormack of Plaistow, James McCormack, Jr. of Lawrence and many beloved nieces and nephews. Relatives and friends are welcome to call on Sunday, January 23rd, 2022 from 4 pm to 6 pm at the John Breen Memorial Funeral Home, Inc., 35 Merrimack Street, No. Andover, MA. Her funeral service will take place at the funeral home at 6:00 p.m. following the wake. Burial will be private. Donations may be made to MSPCA - Angell, Attn: Donations, 350 South Huntington Avenue, Boston, MA 02130. www.mspca.org/donate-now.

Gail Marie (Homan) Runninghawk, 72 of Plaistow, NH passed away on January 12, 2022 at the Holy Family Hospital in Haverhill, MA. Gail was born on the Passamaquoddy Indian reservation and orphaned as a toddler, then spent her adolescent days... View Obituary & Service Information

The family of Gail Marie Runninghawk created this Life Tributes page to make it easy to share your memories.

Send flowers to the Runninghawk family.