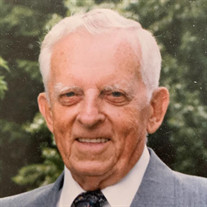 Frank Louis Korycki, 101, of Lawrence and North Andover, a distinguished U.S. Army World War II veteran, passed away on Friday, April 17, 2020, at Lawrence General Hospital. He was the eldest son of the late Anthony and Tekla (Lengowa) Korycki.  He graduated from Johnson High School (1937) and from Wentworth Institute (1939) with an engineering degree.  Frank was drafted into the U.S. Army in March 1941 and served for five years. He trained with the 26th Division, also known as the Yankee Division, at Camp Edwards on Cape Cod. He was later selected for Officer Candidate School at Fort Belvoir, Virginia and was a “90-day wonder” who became a lieutenant. As an officer, he served in the 1897th Aviation Engineer Battalion, part of the 931st Aviation Engineer Regimental Headquarters, and two other battalions, the 836th and 841st, which were responsible for building and repairing airfields on the islands of New Guinea, the Philippines, and Okinawa during World War II. He was very proud of his military service. After the service, he worked as a boiler technician, later as stationary engineer until retiring in 1983. In August 1943, he married Philomena Byra and cherished their 70 years together raising a family, traveling as snowbirds to Florida, and spending time with family and friends. He enjoyed a lifetime of picking blueberries as a boy for his mother, as a father with his daughters and in later years tending a few blueberry plants in his yard and sharing them with his grandchildren and great-grandchildren. He was a lifelong parishioner of St. Patrick Parish. When unable to attend in person, he watched televised church services including Pope Francis’ Easter message last week. Frank remained active and independent throughout his life. He gardened, mowed, shoveled snow and drove his car until a few years ago. Special appreciation to Elder Services of the Merrimack Valley for helping Frank stay in his home of 69 years and to Ashland Farms Senior Living Community in North Andover where he became a fervent bingo player, computer gamer and enjoyed many trips. He is predeceased by his wife Philomena, brothers Julius and Stanley Korycki and son-in-law Robert Dionne.   He is survived by his daughters, Katherine Lacharite and Frances Dionne; five grandchildren, Kristen (and David) Cooley, Gretchen (and John) Sallah, Jeffrey Dionne, Kyle (and Tara) Dionne, and Lindsey (and Tony) Sallese; seven great-grandchildren, Sophia and Jolie Sallah, Cooper and Cole Dionne, Sarah and Evan Cooley, and Olivia Sallese and extended family members. A memorial Mass and Celebration of Life will occur when safe to do so. Donations in his name may be made to Cor Unum Meal Center, 118 South Broadway, Lawrence, MA 01843.

The family of Frank Louis Korycki created this Life Tributes page to make it easy to share your memories.

Frank Louis Korycki, 101, of Lawrence and North Andover, a distinguished...

Send flowers to the Korycki family.