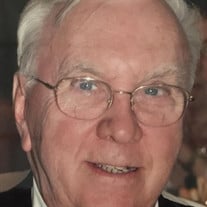 Francis A. O’Connor died Friday, August 20, 2021 at home with his family. A lifelong resident of the greater Lawrence area, he was the son of the late Arthur P. and Gertrude (Taffe) O’Connor. He was a graduate of St. Patrick Grammar School, St. John’s Prep in Danvers and Merrimack College, class of 1956. He served in the United States Army from 1957 to 1959 during the early Vietnam era and received several citations including the Good Conduct Medal. Francis dedicated his life to public service in the fields of Urban Renewal and Public Housing Administration. He served as a member of the Lawrence Redevelopment Authority and the Andover Housing Authority for over 20 years. He had been Director of Redevelopment for the city of Medford, and subsequently director of the Ipswich Housing Authority. He had also been Chief of Staff to former Mayor John Buckley. Locally he was a charter member and past president of the Greater Lawrence Community Action Council, and held office on both Lawrence Democratic City Committee and later on the Andover Democratic Town Committee, the Council on Aging, and the Andover Housing Partnership Committee. He was a member of the National Association of Housing Officials and participated on the legislative committee of the Massachusetts chapter of that group for many years. He was a 65 year member of the Ancient Order of Hibernians and was a past President of the Essex County Board of the Hibernians, and during the 1970’s as Assistant Editor of the National Hibernian Digest. He was selected as Irish Man of the Year in 1988. Mr. O’Connor was also a 60 year member of Council #67 Knights of Columbus and was formerly on the editorial staff of their news letter as well as a former commissioner of the bowling league. An active member of St. Patrick Parish, Francis had been a Eucharistic Minister, RCIA program instructor and an instructor for the Scouting and the CCD programs. He had been active in the South Lawrence West Little League for many years. Frank treasured his Catholic faith, singing Irish music and playing 45’s. He was proud that he passed all three of these gifts on to his children and grandchildren. His ready laugh and charming ways will be greatly missed by many, but especially by his wife of 55 years, Margaret (Lyons) O’Connor, sons Francis Jr. of Andover and Michael and his wife Anita (Zubak) O’Connor of Prague, and a daughter Atty. Eileen Bernal, wife of Les Bernal of Lawrence and his five grandchildren. Frank also leaves two brothers-in-law, John P. Thereault and John M. Lyons, both of Maryland, a sister-in-law Jane O’Connor of Brighton, as well as many nieces and nephews. He was predeceased by his brother, Joseph T. O’Connor and two sisters, Mary (O’Connor) Minzner and Patricia (O’Connor) Mahon. A Funeral Mass will be celebrated on Wednesday, August 25, 2021 at 11:30 A.M. in Sacred Hearts Church, 165 South Main Street, Haverhill, MA. Burial will follow in the Holy Sepulchre Cemetery, Waverly Road, North Andover, MA. Relatives and friends are invited to call on Tuesday, August 24, 2021 from 4:00 to 7:00 P.M. at the John Breen Memorial Funeral Home, Inc., 122 Amesbury Street, Lawrence, MA. It is Frank’s expressed wish that people do not send flowers. Instead, he requests that memorial donations be made to the Joseph Taffe O’Connor Scholarship at Saint John’s Preparatory School, 72 Spring St, Danvers, MA 01923. To send an online condolence or for more information, please go to www.breenfuneralhome.com. Division 8 will hold a prayer service at 6:30 pm on Tuesday, August 24, 2921 at the John Breen Memorial Funeral Home. All members of Division 8, family and friends are welcome to attend.

Francis A. O&#8217;Connor died Friday, August 20, 2021 at home with his family. A lifelong resident of the greater Lawrence area, he was the son of the late Arthur P. and Gertrude (Taffe) O&#8217;Connor. He was a graduate of St. Patrick Grammar... View Obituary & Service Information

The family of Francis A. O'Connor created this Life Tributes page to make it easy to share your memories.

Send flowers to the O'Connor family.