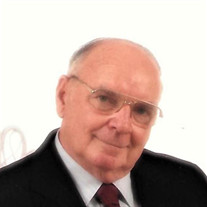 Francis J. Moynihan, 97, a lifelong resident of Methuen, died on Sunday, December 9, 2018, at his home, surrounded by his daughter and his loving family. He was born on September 20, 1921, to Michael J. and Nellie (Flaherty) Moynihan. After working in his father’s milk business (M.J. Moynihan & Sons/Prospect Diary) and coal business as a young man, he enlisted in the United States Navy after the Pearl Harbor Attack. His first ship, the Hugh L. Scott, was torpedoed off the coast of North Africa. He then served on the Dorothea L. Dix in Sicily. From there he was sent to the Pacific, where he was a Boat Coxswain second class, attached to the U.S.S. Freemont during amphibious operations. He was in seven invasions in the Pacific, including Lingayen Gulf, Leyte, Luzon, Saipan, Tinian, Angaur, and Iwo Jima. He was awarded the Bronze Star Medal for “contributing materially to the saving of many lives.” The citation reads, “His skill, courage, and devotion to duty were in keeping with the highest traditions of the United States Naval Service.” He was authorized to wear the Combat “V”. Francis worked as a machinist at Western Electric and retired from Lucent Technologies. He enjoyed fly fishing, vegetable gardening, music, and reading. He could fix anything from his tractor and cars to plumbing and electrical work. He was a huge fan of Central Catholic High School basketball. What defined Francis the most is that he was a devoted and loving husband and father. He married Clare Dolan in 1948, and they had one child, Karen Moynihan. In later years, he became the family patriarch to his extended family. He was predeceased by his beloved wife of nearly 48 years, Clare, and his brothers John Moynihan, Daniel Moynihan, Augustine Moynihan, and his sisters Mary Moynihan, Eileen Karalow, and Genevieve (Jeannie) Olmstead. Francis is survived by his daughter Karen Moynihan and several nephews and nieces and their children and grandchildren. His nephew Daniel Moynihan and Dan’s wife Carolyn assisted Karen in providing loving care for Francis in his final years. Friends and family are invited to visit on Saturday, December 22, 2018 from 10:00AM to 11:00AM, and funeral service to follow at 11:00AM at the John Breen Memorial Funeral Home, Inc. 122 Amesbury Street, Lawrence, MA, 01841. For more information or to send an online condolence please visit our website at www.breenfuneralhome.com

Francis J. Moynihan, 97, a lifelong resident of Methuen, died on Sunday, December 9, 2018, at his home, surrounded by his daughter and his loving family. He was born on September 20, 1921, to Michael J. and Nellie (Flaherty) Moynihan. After... View Obituary & Service Information

The family of Francis J. Moynihan created this Life Tributes page to make it easy to share your memories.

Send flowers to the Moynihan family.