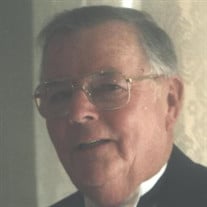 Francis D. Martin, 93, passed away peacefully at Mary Immaculate Nursing/Restorative Center in Lawrence on Thursday, September 20, 2018. Francis was born December 5, 1924 in Lawrence to the late Frank and Anne (McEachern) Martin. After graduating from Lawrence High School, he enlisted in the U. S. Navy. He was a signalman aboard a patrol craft in the Mediterranean and is a veteran of the battle of Anzio. Following his North African, Middle Eastern and European service he was transferred to the U.S.S Everett F. Larson. As plank holding member of the Larson’s inaugural crew, he was in route to Japan when the war ended in 1945. The Larson aided in post war Japanese disarmament. Frank was honorably discharged in 1946. In 1948 he joined the Lawrence Fire Department and served for 25 years. As a member of the Pipefitters Local 537 he worked as a plumber in North Andover until his retirement. After retirement he enjoyed woodworking, genealogy and traveling. His greatest joy was summers spent at Salisbury Beach with his family especially his grandchildren. He was the husband of the late Marie (Flathers) Martin with whom he shared 64 years of marriage. Francis was a lifelong and active member of St. Patrick Parish serving in many ministries including Holy Name Society, Pre-Cana and the St. Vincent de Paul Society. He truly lived his catholic faith by serving those in need and especially in caring for his wife as she battled Alzheimer’s disease. He is survived by his children Margaret Martin of Lawrence, Daniel and his wife Corinne Martin of Methuen, Charles Martin of Salisbury, Claire and her husband David Coco and Donald Martin of Methuen and Mary Lou and her husband William Kennedy of Atkinson, NH. His grandchildren Alyssa and her husband Jacob Elwell, Jeffery, Caitlyn and Patrick Martin and Connor and Liam Kennedy. He is also survived by his brother in law Neil and his wife Eleanor Flathers of Hingham and several nieces and nephews. He was predeceased by his brothers Alan, Leo and John Martin. The family would like to thank the staff of Unit 3A at Mary Immaculate Nursing Home for the great love and care they gave Frank over the past year. The culture of care was evident daily and it brought great comfort knowing he was there. A Funeral Mass will be celebrated on Wednesday, September 26, 2018 at 11:00 A.M. in St. Patrick’s Church, 118 South Broadway, Lawrence, MA. Burial will follow in the Holy Sepulchre Cemetery in North Andover, MA. Relatives and friends are invited to call on Tuesday, September 25, 2018 from 4:00 to 8:00 P.M. at the John Breen Memorial Funeral Home, Inc., 122 Amesbury St., Lawrence, MA. In Lieu of flowers donations can be made in Francis’ memory to Mary Immaculate Nursing/Restorative Center, 172 Lawrence Street, Lawrence, MA. 01841 or Cor Unum Meal Center, 191 Salem, Street, Lawrence, MA 01843. To send an online condolence or for more information, please go to www.breenfuneralhome.com.

The family of Francis D. Martin created this Life Tributes page to make it easy to share your memories.

Send flowers to the Martin family.