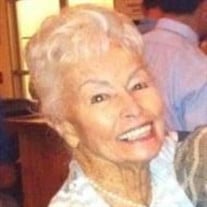 Frances Edith Hyde Stephan, 93, passed peacefully on June 6, 2020, at Sea View Retreat in Rowley, Mass., where she lived for the past eight months. Frances was born and raised in Methuen, Mass., with her sister Alice Walker of Newbury, Mass., and her brother Dr. Kenneth Hyde of Methuen, Mass., who have both predeceased her. When Frances was seven her mother Mary Kenney Hyde died, leaving her father William Russell Hyde to raise them until he passed in 1962. Frances graduated from Edward F. Searles High School in Methuen, Mass., in 1944. She waitressed at the Hampton Beach Ashworth Hotel restaurant for the summer with friends and won Miss Hampton Beach before going on to graduate with high honors from Colby College in 1948. While at Colby, she met her late husband Benjamin B. Zecker, who was attending Colby, a triple team captain, star athlete, and WWII Marine veteran who later became a well-known football official and officiated his first Harvard/Yale football game in 1960, Frances and Ben married and lived in Shrewsbury, Mass., where they raised their two children Daniel Hyde Zecker and Holly Blanche Zecker. Benjamin predeceased her in 1967 at the young age of 46 as did her daughter Holly in 1994 at the age of 37. Frances worked for New England Trading for many years as a women’s clothing buyer and was also the silent partner at Alice Walker Clothing Shop in Salisbury, Mass., in the 1970s. She later met and was remarried to John J. Stephan in 1971, who predeceased her in 2004. They were married for 34 years and lived between Framingham, Mass., and Singer Island, Fla., and enjoyed an active lifestyle of travel and golf. Frances also enjoyed visiting museums, theater, playing tennis, bridge, riding her bicycle, picking fresh flowers from the garden, reading with her great granddaughters, enjoying her son’s home cooked meals, and especially loved the fun gatherings with friends and family. Frances leaves behind her devoted son Daniel Hyde Zecker and his wife Mina of Newbury, Mass.; her loving granddaughter Danielle M. Zecker-Hannon and husband James G. Hannon Jr. from N.H. with their three daughters, Heron, 12, Corva, 10, and Lutra, 7, who Frances cherished so dearly, and her loving grandson, Benjamin M. Zecker from California who always lifted her spirits and made her smile. Frances enjoyed a lot of wonderful times spent over the years with her three step-children Linda and her husband Orin Kruschke from Minnesota, Dudley Stephan, and Nancy and her husband Bruce Hulme of Framingham, Mass. She also leaves behind her step-grandchildren Jacque, Mandy, Ryan, Meagan, Brandon, Devon, and Kelsey; and several great-grandchildren whom she adored very much. Frances will also be missed by her nieces, nephews, and her dearest friends, from near and far, who all took the time to call, visit, send cards, gifts and flowers when she needed it the most. Frances will be greatly missed by her dedicated loving family and friends. They are thankful for the wonderful care and dedication that was given to her at Sea View Retreat in Rowley, and by Kate Racca, her home health aide for many years. Services are private and are under the direction of the John Breen Memorial Funeral Home, Inc., 35 Merrimack Street, North Andover, MA. For online condolences and other information, please visit us at www.breenfuneralhome.com. In lieu of flowers, friends and family are asked to donate to the Frances Stephan Memorial Fund at her great grand daughters’ school, the Mountain Village Charter School. For Frances the importance of a good education was a core value, and this is a fitting way to celebrate her life. Donations may be made electronically at www.mountainvillagecharterschool.org, or by mail at Mountain Village Charter School, Frances Stephan Memorial Fund, 13 NH Route 25, Plymouth, NH 03264.

Frances Edith Hyde Stephan, 93, passed peacefully on June 6, 2020, at Sea View Retreat in Rowley, Mass., where she lived for the past eight months. Frances was born and raised in Methuen, Mass., with her sister Alice Walker of Newbury, Mass.,... View Obituary & Service Information

The family of Frances Edith Hyde Stephan created this Life Tributes page to make it easy to share your memories.

Send flowers to the Stephan family.