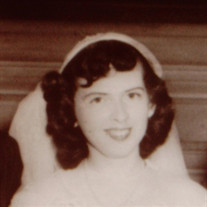 Eleanor M. (Carey) Thomson, 88, of Salisbury, Massachusetts, formerly of Lawrence, Mass. and Seabrook, N.H., passed away on January 30, 2020 at Brigham Health and Rehabilitation Center on High Street in Newburyport following a brief illness. She was born in Lawrence, on December 2, 1931, to the late Thomas L. "Larry" and Mildred (Walsh) Carey and graduated from Lawrence High School. Her father was a longtime member of the Lawrence Fire Department, Engine 8. In her younger years she worked at Brockelman's Market in Lawrence, an experience that gave her many pleasant memories. She married William E. Thomson at Saint Augustine's Church in Lawrence on April 24, 1955. This coming April would have marked their 65th wedding anniversary. From 1974 until 1988 she resided at Seabrook Beach. She loved living at the beach and always remembered these years as the happiest of her life. She was an avid reader of mysteries and Agatha Christie books were her favorites. She had many vivid memories of growing up during World War 2 and enjoyed passing along stories about the family to her son. She also adored the many cats and dogs she owned during her lifetime. Eleanor is survived by her husband William E. Thomson of Salisbury, her son Brian Thomson, daughter-in-law Victoria, and granddaughter Alison, of West Newbury, her cousin Kathleen Pearse and family, as well as several distant cousins. She was predeceased by her brother Lawrence F. "Sonny" Carey, who died in 2012, as well as a sister, Marilyn Carey, who died in infancy. Arrangements were lovingly made by the John Breen Funeral Home and a private burial service was held on Wednesday, February 5, 2020 at Saint Marvs Cemetery in Newburyport.

The family of Eleanor M Thomson created this Life Tributes page to make it easy to share your memories.

Send flowers to the Thomson family.