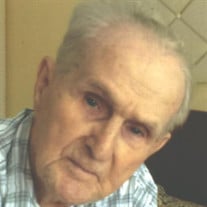 Edward Turner Todd, 96, passed away peacefully at Prescott House Nursing Home in North Andover, MA on Friday, September 28, 2018. Edward was born November 30, 1921 in Greenville, NC, son of the late William Hill Todd and Bertie (Stocks) Todd King. He enlisted and served in the US Navy and later became a horse trainer and harness race driver at Rockingham Park. After retirement, Edward enjoyed spending time with his children, grandchildren, great grandchildren and great, great grandchildren for holidays, birthdays and cookouts. Many would get a good laugh with him as he would reminisce. He was the husband of the late Alice (Anderton) Todd. Edward is survived by his children Mary Ann Houle and her husband, Richard, of Florida, Billie Alice Scharn of Haverhill, MA, Faith Ann Puglisi of Colorado, Lily McCormack and her husband, Richard, of Gloucester, MA, Edward Jr. and his wife, Mary Lou, of Peru, ME, Barry and his wife, Gail, of Methuen, MA, Kevin and his wife, Audrey, of Derry, NH, Dawn Armstrong of Arizona, Pamela HIllerby of Tennessee, Penny Pelletier and her husband, Raymond, of Holyoke, MA and Kim Waldie and her husband, Timothy, of North Andover, MA. He is also the brother John King of New Mexico and the late Billie (Todd) Whitson of California and Robert King of Tennessee. Edward was the proud grandfather of more than 40 grandchildren, great grandfather of more than 70 great grandchildren and great, great grandfather to several. The family would like to thank the staff at Prescott House as well as their hospice staff for the wonderful, loving care that was given to Edward over the last three years. It has brought great comfort knowing he was so well cared for. Services will be private at a later date.

The family of Edward T. Todd created this Life Tributes page to make it easy to share your memories.

Send flowers to the Todd family.