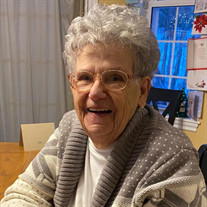 Edna C (Cyr) McGregor, 90 formerly of Lawrence, MA and currently of Derry, NH, passed away in her sleep on October 29, 2021. Edna was born in Lawrence, MA, where she raised her family and lived most of her life. She is the daughter of the late Edna (Proulx) and Alfred Cyr. Edna was educated in the Lawrence Public Schools and spent 25 years working for Superior Shoes as well as Sterling Drug Store and most recently St. Michael’s Church. She also used her love of Bingo to work at many of the Lawrence Bingo Halls including St. Patrick’s, Sacred Heart and St. Mary’s. Edna was passionate about sewing. She made clothes and pajamas for her children, grandchildren and great grandchildren. She made barbie clothes, cabbage patch doll clothes and American Girl Doll Clothes. She even made one of her daughter’s wedding gowns. In addition to sewing, she loved to collect things like stamps, playing cards, spoons and bells. She was an avid Forty-Fives and Bingo Player. She also enjoyed traveling with her best friend Terri and doing things with her daughters. Edna is survived by her daughter, Donna (McGregor) Fleming & her late husband George Fleming of North Andover, MA, Arlene (McGregor) Adams of Derry, NH and Jane McGregor of Windham, NH. She was the dear sister of Alice (Cyr) Boucher of Manchester, NH and the late Lillian (Cyr) Goguen. Edna is the loving Grandmother of Kim (Fleming) DeVries and her husband Steve of Windham, NH, Michael Fleming of Youngsville, NC, John McGregor and his wife Renee of Windham, NH, Lauren (Adams) Morin and her husband Joe of Derry, NH and Kyle Adams of Derry, NH. She is the cherished Great Grandmother of Paige, Anthony, Sam, James, Deacon, Gianna and Mayzie. Edna is also survived by several nieces and nephews. She is predeceased by her husband James McGregor. Relatives and friends are cordially invited to call on Wednesday, November 3rd, 2021 from 4:00 p.m. to 8:00 p.m. at the John Breen Memorial Funeral Home, Inc., 35 Merrimack Street, No. Andover, MA. Her funeral mass will be celebrated on Thursday, November 4th, 2021, at 10:00 a.m. in Saint Michaels Church, 196 Main Street, No. Andover, MA. Burial will follow in the Immaculate Conception Cemetery in Lawrence, MA. For online condolences and other information please visit us at www.breenfuneralhome.com.

Edna C (Cyr) McGregor, 90 formerly of Lawrence, MA and currently of Derry, NH, passed away in her sleep on October 29, 2021. Edna was born in Lawrence, MA, where she raised her family and lived most of her life. She is the daughter of the... View Obituary & Service Information

The family of Edna C. McGregor created this Life Tributes page to make it easy to share your memories.

Send flowers to the McGregor family.