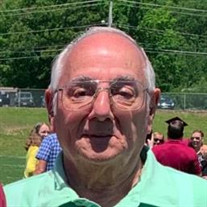 Douglas was born on March 21, 1942 in Lawrence. He grew up in the Plains area of Lawrence surrounded by his family and cousins. He developed friendships that he kept through the years. He was brought closer to all of those childhood memories since going back to St. Anthony’s Church in Lawrence in the ‘90s, where he always made the coffee—right up until his last Sunday service. He married the love of his life, Mary in 1969. For their 50th Anniversary this past year, they visited three cities in Italy—which he described as the most wonderful trip. Together, Doug and Mary had five children together. Doug worked for the Massachusetts Army National Guard for 37 years. He enjoyed watching the Red Sox and Patriots and was a lifelong fan (to the disgust of his Yankees loving wife). After retiring from the National Guard, Doug had a flourishing social life. Along with Mary, he attended weekly Friday dinners with his cousins and their spouses. They all were all regulars at the outdoor concerts in Hampstead and performances at the Timberlane PAC. Every week, Doug went breakfast with his cousins, Rodney, Bob, and Beverly. In addition to his busy social calendar, “Jiddo” loved to spend time and visit with his grandchildren. Doug is survived by his wife Mary (Cardillo) Pica; his brother, Ron Pica and his wife Diane of Cape Coral, FL; and his children Kelly Phelps and her husband Joel of Wilmington, NC; David Pica and his wife Kelly of Plaistow, NH; Martha Shaw and her husband Harry of Plaistow, NH; Kathleen Whitson, and her husband Patrick of Berryville, VA. He is also survived by his 10 grandchildren: Ashleigh, Tyler, Abby, Jared, David, Rith, Molly, Prudence, Charlotte, Liam; many nieces and nephews; and a few beloved pups. He is predeceased by his son Douglas P. Pica and his brother, Kenneth Pica of California. In lieu of flowers, please make a donation to Lazarus House. https://lazarushouse.org/ Due to the country’s current health crisis, a service will be held at a future date.

Douglas was born on March 21, 1942 in Lawrence. He grew up in the Plains area of Lawrence surrounded by his family and cousins. He developed friendships that he kept through the years. He was brought closer to all of those childhood memories... View Obituary & Service Information

The family of Douglas Pica created this Life Tributes page to make it easy to share your memories.

Send flowers to the Pica family.