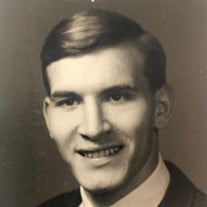 Douglas Glen Mathieson, 71, of Chelmsford, Massachusetts, died peacefully on Thursday, April 23, after a long, arduous battle with many debilitating health conditions. Born Stavros Spiridonos on August 1, 1948, on the island of Samos, Greece, Doug was adopted into this country by William and Ruby Mathieson, of Reading, Massachusetts, and renamed at the age of eight. He didn’t speak a word of English when he arrived in New York City, but he championed his way through the American school system and culture, becoming quarterback of his high school football team and succeeding at many other sports, and going all-state in voice and trumpet, for which he earned college scholarships. Doug spent nearly his entire career teaching middle school for the Lawrence, Massachusetts, school system, where he also actively coached sports. He was best known for rocking the boat and making the children laugh. For many years he also worked in sales, for which he had a natural talent and won numerous awards and accolades despite his part-time status. Doug’s love for and knowledge of American sports was unparalleled; he never (ever) missed a Sox game and was an avid sports card collector. A musician at heart, he deeply enjoyed music and imparted his passion for it – and for life – to his only child and daughter. He was intimately connected to nature and was a kind soul who gave to perfect strangers and made everyone laugh. He was a strong man, but a sensitive one who saw the beauty in the world. His greatest passion, though, was for raising his daughter, to whom he devoted his life. Doug is survived by his only child, Marissa Mathieson, of Amherst, New Hampshire, and his two grandchildren, Harrison and Hendrix Dube, and his sister Dianna Hoffmann, of Fort Lauderdale, Florida, and her son Nicholas and his family. Dianna was adopted into this country with Doug at the age of seven and remained close to him to the end. A memorial service will be held at the John Breen Memorial Funeral Home in Lawrence, Massachusetts, at a later date to be determined. Information will be posted on the funeral home website and on social media.

The family of Douglas Glen Mathieson created this Life Tributes page to make it easy to share your memories.

Send flowers to the Mathieson family.