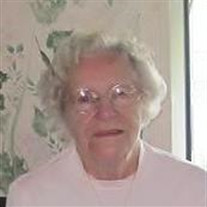 Dorothy Anne (Latulippe) Battle born December 25, 1924 passed away March 5, 2018 in the company of her large family after a short illness. Dot as she is affectionately known is preceded by her parents Adelard Latulippe and Anna Gendron. Dorothy was born and educated in Lawrence and is a graduate of Lawrence High School class of 1942. She worked in multiple fields while raising a family and finally retired from Raytheon in Andover in 1986. Post retirement she enjoyed traveling and visiting friends and family throughout the country. Dorothy was an avid “45”s player and loved having large family and friends gatherings. Insisting on Sunday dinners where all were invited and were expected to bring guests. She took up the task of maintaining multiple family tree’s of the original Battle(s) family of Methuen. She is the wife of the late: Stephen P. Battle. She leaves 6 children and their spouses. Daughters; Norinne E. Sirois of Lawrence, Ma., Elizabeth Currier of Marblehead, Ma, sons; Timothy P. Battle and wife Cynthia of Amesbury, Ma., Stephen C. Battle and partner Patricia Altlman of Salisubry, Ma. , Daniel J, Battle and wife Mary of Portsmouth, NH, Mark D. Battle and wife Charlotte of Salisbury, Ma. Dot is also survived by her brother Raymond Latulippe and his wife Mary of Nalcrest, FL. In addition to her sons and daughters, she has 22 grandchildren, 35 great grandchildren and 6 great, great grandchildren. She is predeceased by her brothers Francis and Henry Latulippe. A funeral service will take place on Friday, March 9, 2018 at 10:00AM at the funeral home. A burial will follow in the Immaculate Conception Cemetery in Lawrence. Friends and family may call on Thursday, March 8, 2018 from 4:00PM to 8:00PM at the John Breen Memorial Funeral Home Inc. 122 Amesbury St. Lawrence, MA. 01841 In of flowers please considered making donations to Lazarus House 260 Park Street, Lawrence, MA. 01841 or https://lazarushouse.org/donate/.

Dorothy Anne (Latulippe) Battle born December 25, 1924 passed away March 5, 2018 in the company of her large family after a short illness. Dot as she is affectionately known is preceded by her parents Adelard Latulippe and Anna Gendron. Dorothy... View Obituary & Service Information

The family of Dorothy Anne (Latulippe) Battle created this Life Tributes page to make it easy to share your memories.

Send flowers to the Battle family.