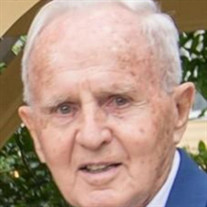 David L. Cargill, 94, a resident of Lawrence, MA, passed away on Thursday, December 17, 2020 at the Prescott House Nursing Home in North Andover, MA. Born in Andover, MA, David was the son of the late William and Mary (Lyle) Cargill. He was educated in the Andover schools and was a graduate of Punchard High School. David was a true gentleman and man of character who had a deep faith and was a lifelong member of the Free Christian Church in Andover, MA. He served his country in the United States Army during World War II and he continued his service as a firefighter in the city of Lawrence for over 30 years. After retiring in 1991, he and Joan, his beloved late wife, wintered in Florida and spent the summer months at Seabrook Beach in New Hampshire. David enjoyed spending time with his family and friends. He also liked to golf and walk daily, even continuing these daily walks well into his 90’s. David was the widower of Joan F. (Keefe) Cargill. They shared 67 years of marriage together. He leaves his daughters: Susan Muraco and her husband Joseph of Haverhill, MA, Mary Lou MacPherson of Groton, MA; and his sons: David Cargill and his wife Elizabeth of Hampton, NH; Daniel and his wife Kathleen of Methuen, MA. He will also be missed by his grandchildren: Sarah Guilmette, and her husband Ronald of Merrimac, MA; Joseph Muraco, and his wife April, of Plaistow, NH; Jeffrey Cargill, and his wife Crystal of Washington, DC.; Julianne Cargill Headley, and her husband Brian Headley of Groveland, MA; Megan Cargill of Nottingham, NH; Michael Cargill of Hampton, NH; Ian MacPherson of Groton, MA; Jenna MacPherson of Groton, MA; and Callie MacPherson of Groton, MA. In addition, he had three great-grandchildren, JJ and Hannah Muraco and RJ Guilmette. He was predeceased by his beloved daughters Joyce M. Cargill and Mary Anne Cargill, as well as his siblings William Cargill, Elizabeth Westbrooke, Margaret Solomon and Hildamay Clements. Due to the current pandemic, visitation and burial will be private. A funeral service will be held at Free Christian Church in Andover, MA on Wednesday December 23, 2020 at 11 AM. To send an online condolence or to share a memory of David, please go to www.breenfuneralhome.com. Additionally, the family would like to thank the staff, nurses, aides and therapists at Prescott House for all the care and kindness that David received, particularly during the pandemic this past year. In lieu of flowers and in David’s memory, we ask that you do an act of kindness or offer an encouraging word to someone in need.

David L. Cargill, 94, a resident of Lawrence, MA, passed away on Thursday, December 17, 2020 at the Prescott House Nursing Home in North Andover, MA. Born in Andover, MA, David was the son of the late William and Mary (Lyle) Cargill. He was... View Obituary & Service Information

The family of David L. Cargill created this Life Tributes page to make it easy to share your memories.

Send flowers to the Cargill family.