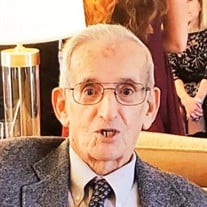 Charles Henry Wentworth Jr passed away on September 22, 2019, at Prescott House in North Andover, after a long struggle with several health issues. Most commonly called Charlie or Chuck he was a resident of North Andover almost his entire life. Born on September 29, 1929 in Tewksbury, he was a graduate of the Bradstreet School and went on to further his education at Essex Agricultural School graduating in 1948. He was a longtime member of the North Andover Grange, becoming a State Deputy visiting many Granges, throughout the state of Massachusetts. Charlie's true love was farming, having worked at several farms around the area, his last being Hayes Dairy Farm in North Andover, until it closed and then was employed at Glennie's Dairy in North Andover, for several years. He retired from Daly Drug in Lynnfield. You could always count on Charlie for great stories, which usually had the room filled with laughter. Charlie was predeceased by his wife Arlene Hughes, his grandson Kyle Wentworth and his siblings Virginia, Elizabeth and her husband John Hay, Roger and his wife Peggy, Robert, Shirley and her husband Guido Montanaro, and his twin sister Mary and her husband Joseph Noone. Charlie is survived by his son Gary and his wife Lauretta, his daughter Charlene Flores, five grandchildren, Keith Wentworth and his wife Jennifer, Courtney Dziadosz and her husband John, Amy Stiner, Alexandra Flores and Emilio Flores, eleven great grandchildren, several nieces and nephews, his brother Philip and his wife Mary Jane, his sister in law Jeanette Wentworth, his brother in law Robert Hughes and his wife Jane, his sister in law Irma Hughes and his longtime friend, Joseph Griffin. Per Charlie's request, there will be no calling hours and burial will be private. Donations, in his memory, may be made to the MSPCA at Nevins Farm in Methuen.

Charles Henry Wentworth Jr passed away on September 22, 2019, at Prescott House in North Andover, after a long struggle with several health issues. Most commonly called Charlie or Chuck he was a resident of North Andover almost his entire life.... View Obituary & Service Information

The family of Charles Henry Wentworth Jr. created this Life Tributes page to make it easy to share your memories.

Send flowers to the Wentworth family.