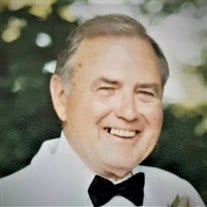 Charles P. Donovan, 89, passed away peacefully on Monday, November 20, 2017, surrounded by his wife and daughters. Born in Lawrence MA on September, 26, 1928, he was one of 10 siblings born to John and Margaret (Keating) Donovan. Charles was educated in Saint Patrick’s grammar school and graduated from Lawrence High School in 1946, where he was a member of the LHS Lancers football team. After high school he joined the army and served during the Korean War. When he returned from the army, he worked for Manchester Paving Company before becoming a Lawrence Firefighter where he served his community until his retirement. Upon retiring, he worked at the Reliefs In as a bartender and manager for a number of years. Charles was a devout Catholic, attending St. Patrick’s and St. Mary’s parishes in Lawrence until moving to Florida where he continued attending mass faithfully each week. He was quiet and introspective by nature, but very social and enjoyed a rich social life as a member of the Elks and the Ancient Order of Hibernians. Charles was an avid reader and a natural story teller. Whether relaying a tale of his childhood, or retelling the story of an interesting novel he had read, his warm style and unassuming manner drew listeners close to hear his words. In 1987, Charles was heartbroken with the sudden loss of his wife Heloise (Peg). He chose the words, “True love lives on” to memorialize her gravestone. He understood that despite his loss, life must go on. He eventually remarried and enjoyed several years residing on the gulf coast of Florida. He loved swimming in the gulf and walking on the beach. His retirement years brought him the opportunity to travel throughout Florida, as well as to many other states, and abroad. His devotion to family never wavered. For as long as he was able, he returned to Massachusetts every September to celebrate his birthday with family, and every May to visit the graves of his dearly departed relatives on Memorial Day. Gentle and kind, religious and loving, his beautiful blue eyes and perfect Irish smile, will leave an indelible mark on our hearts until we meet again. Charles will be deeply missed by his wife, Marian (Hancock), his daughters, Nancy Toscano (wife of the late Salvatore Toscano) of Newburyport, Diane Alaimo and her husband Michael of Methuen, Lori Donovan of Haverhill, and Cynthia Saba and her husband Daniel of Methuen; his six grandchildren Michelle, David, Domenic, Brendan, Sophia and Daniel; great-grand children Melissa, Nolan and Leana; Great-great grandchildren Aubriella and Bradley; and sister- in- law Ann (Speechley) Donovan. In addition to Heloise, he was predeceased by his grandson, Patrick, his granddaughter Gina, his siblings Elizabeth, Andrew, Jeremiah, Christopher, John, Margaret, William, Cornelius, and Daniel, and many beloved nieces and nephews. His funeral Mass will be celebrated on Wednesday, November 29, 2017 at 11 a.m. in St. Patrick Church, 118 South Broadway, Lawrence, MA. His burial services will follow in the Immaculate Conception Cemetery in Lawrence. His daughters invite family and friends to celebrate Charles’ life at his calling hours on Tuesday, November 28, 2017, from 3 to 7 p.m. at John Breen Memorial Funeral Home, Inc., 122 Amesbury St., Lawrence, MA. Memorial contributions can be made to: Patrick Donovan Alaimo Scholarship C/O Methuen Cooperative Bank, 243 Broadway, Methuen, MA, 01844 or to Lazarus House Ministries, PO Box 408, Lawrence, MA, 01842-0808, https://lazarushouse.org/donate/ For more information or to send and online condolence, please visit our website at www.breenfuneralhome.com.

Charles P. Donovan, 89, passed away peacefully on Monday, November 20, 2017, surrounded by his wife and daughters. Born in Lawrence MA on September, 26, 1928, he was one of 10 siblings born to John and Margaret (Keating) Donovan. Charles was... View Obituary & Service Information

The family of Charles P. Donovan created this Life Tributes page to make it easy to share your memories.

Send flowers to the Donovan family.