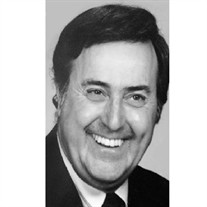 Carmen Thomas Reitano, 85, passed-away peacefully on Saturday, November 18, 2017, surrounded by his loved ones. He was the beloved husband of Annette (DeMarco) Reitano, to whom he was married for 62 years. Born in Lawrence, MA on March 29, 1932, the son of the late Thomas Reitano and Doniella (Mele) Reitano. He was raised in Lawrence, graduated from Central Catholic, class of 1950, and Merrimack College, class of 1957. He proudly served as a first-class airman in the U.S. Navy during the Korean War on the U.S.S. Midway. He enjoyed his time as a programmer and announcer at the Naval Air Station. He worked at several high-tech companies as a sales and marketing executive, including AT&T, NCR, Burroughs Corp., Wang Industries, and retired as Vice President of U.S. sales for Hyundai Electronics. He enjoyed sailing, skiing, and being an amateur inventor – holding many patents. In retirement, he and his wife traveled all over Europe and Asia, enjoying their adventures with his sisters and brothers-in-law. His greatest pleasure was spending time with family and friends at his beloved beach house. It was a gathering place for everyone he loved, and holds special memories for all. Carmen will be deeply missed by his wife Annette, his three daughters, Donna Parisi and her husband Daniel of Methuen, Robyn Rockwood and her husband Peter of Redondo Beach, CA, and Lynne Cheney and her husband Walter of Portsmouth, NH; his nine grandchildren, Danielle Pikus and her husband Daniel, Lauren Parisi and her fiancé Ryan Mustapha, Alex Parisi, Jordan Brown, Andrew Brown, Cody Fowler and his wife Sarah, Jake Fowler and his fiancé Jessica Hankamer, Carmen Cheney, and Mia Cheney; his four great-grandchildren, Oliver, Landon, Amette, and Audrey; his two sisters, Lydia Norcia and her husband Domenic of Los Gatos, CA, and Felicia Siggens and her husband Robert of Methuen; and several nieces and nephews. He was predeceased by his brother Thomas Reitano. Family and friends will honor and celebrate Carmen’s life, at his calling hours on Wednesday, November 22, 2017, from 2-5pm, at John Breen Funeral Home, Inc., 35 Merrimack Street, North Andover. There will be a service at 5pm. In lieu of flowers, memorial contributions can be made to Salisbury Beach Citizens for Change, make checks payable to S.B.C.F.C, 190 North End Blvd, Salisbury, Ma 01952 or to Mary Immaculate Management Corporation 172 Lawrence Street Lawrence Ma Attention Joanne Sheehan.

Carmen Thomas Reitano, 85, passed-away peacefully on Saturday, November 18, 2017, surrounded by his loved ones. He was the beloved husband of Annette (DeMarco) Reitano, to whom he was married for 62 years. Born in Lawrence, MA on March 29,... View Obituary & Service Information

The family of Carmen Thomas Reitano created this Life Tributes page to make it easy to share your memories.

Send flowers to the Reitano family.