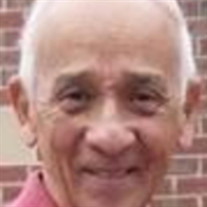 Mr. Carlos N. Hayon passed away peacefully at his home in Andover, Massachusetts on September 2nd at the age of 83, a few days shy of his 84th birthday. Carlos could accomplish anything he set his mind to and as a result lived a wonderful, full life. He enjoyed many years of traveling the world with his beloved wife Gloria, volunteering time at the soup kitchen and the library and spending time with family, friends and his grandchildren. At a very early age, he learned to play the piano and would often share his talent with friends and fellow parishioners. Those who had the opportunity to attend the annual family Christmas eve dinner were treated to the tradition of Carlos playing Christmas carols on the piano accompanied by the annual carol sing along. Carlos worked for the Commonwealth of Massachusetts for many years and often spoke fondly of his colleagues and the experiences he had. When he originally started his role as a social worker for the Department of Welfare, he was one of the few Spanish speaking social workers and as a result, he had the opportunity to serve a unique role for the community. He was often found offering his services of translation to help a client gain access to services. He was particularly proud of these moments because as an immigrant himself, he understood the value of helping and showing kindness to others. He was known for reminding others that "just because I speak with an accent, don’t mean I think with an accent". Carlos had a unique relationship with his grandchildren. He invented little games for each child and loved when the grandchildren would spend the night. He would fool the kids into thinking that they were breaking the rules and staying up all night. Carlos is survived by his wife of 49 years, Gloria; his oldest son Diego of Santa Rosa Beach, FL; his youngest son Christian and his wife Kerry Ann of Tyngsborough, MA; and his three grandchildren, Jisela, Ella and Reed. At Carlos' request, no service will be held. In lieu of flowers, please consider a donation to the Cor Unum Meal Center 191 Salem St, Lawrence, MA 01843

Mr. Carlos N. Hayon passed away peacefully at his home in Andover, Massachusetts on September 2nd at the age of 83, a few days shy of his 84th birthday. Carlos could accomplish anything he set his mind to and as a result lived a wonderful,... View Obituary & Service Information

The family of Carlos N. Hayon created this Life Tributes page to make it easy to share your memories.

Mr. Carlos N. Hayon passed away peacefully at his home in Andover,...

Send flowers to the Hayon family.