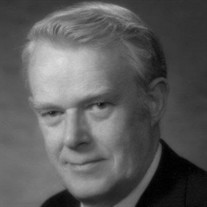 Carl Ivar Swanson, 91, passed away peacefully at his home at The Edgewood in North Andover, MA on March 27, 2020. Born on April 4, 1928 in Medford, MA to Karl E and Ella G Swanson, Carl married Violet Virginia Barrow on March 27, 1954. Carl leaves his wife Violet, his children Linda, Carl, Gail, and Kristine, grandchildren Heather, Eric, Lauren, Jessica, John and Rebecca and 2 great grandchildren, Tanner and Lydia. As a youth Carl was an Eagle Scout and then a valedictorian at Howe High School . He served as a member of the US Navy from 1946-1949 and then graduated with Bachelors and Masters degrees from MIT. Carl began his career at Philco Corporation, Philadelphia, PA and worked for other semiconductor companies in marketing and management positions before accepting an engineering management position at Fenwal in Ashland, MA. He retired from Fenwal in 1990 as a Vice President. His employment changes brought him to settle his family in Boylston, MA. As a resident of Boylston, he was active in the Boylston Couples Club and on the Church Board of Trustees. He served on local and regional committees including the Boylston Water District, school committee and as a member and president of the Boylston Lions Club. Upon retirement, Carl & Vi purchased an Airstream Travel trailer. For 17 years, he and Vi traveled every state in our nation, the provinces of Canada and most of the states of Mexico, as well as many countries in Europe. They capped their travel adventures by circumnavigating the globe on a container ship. In 2007, Carl and Vi moved to the Overlook in Charlton, MA where Carl became a member of the Rose of Sharon Masonic Lodge. He became a 32nd Degree Mason in December of 2008 and served his lodge as Treasurer and as a Founder & Trustee of the Charlton Masonic Angel Fund. In 2015, Carl and Vi moved to Edgewood Retirement Community in North Andover, MA, to be closer to immediate family. In lieu of flowers, memorial contributions can be sent “In memory of Carl Swanson” to: Charlton Masonic Angel Fund, c/o Jim Alexander, 88 Masonic Home Road APT P215, Charlton, MA  01507-3308 OR Boylston Lions Club,P.O. Box 50, Boylston, MA 01505

The family of Carl Ivar Swanson created this Life Tributes page to make it easy to share your memories.

Carl Ivar Swanson, 91, passed away peacefully at his home at...

Send flowers to the Swanson family.