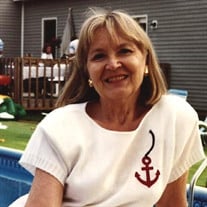 Camille Josephine (Birch) Fox passed away peacefully on Sunday, July 7, 2019 in North Andover at the age of 96. Born and raised in Antwerp, Belgium, Camille met her future husband, John Fox, during World War II. He had been part of the US Army forces sent to France immediately after D-Day, and was later stationed at the Port of Antwerp, which received relentless bombing for a period of several months. Shortly after the war, he returned to Antwerp in April 1946 and asked for Camille’s hand in marriage. They were married in Antwerp, and soon headed to the USA. They settled in Boston where their first child Marjorie was born. Making use of the GI Bill, they bought a small house in Natick, where their son John was born. Several years later they would move to Wayland, where they spent many years. After the children were grown, Camille pursued employment in several fields. Her working career concluded with 21 years at Raytheon in project accounting. She returned to Belgium on a few occasions to see old friends, including two visits while her son John was transferred to Europe for business. In addition to Camille’s two children, she is survived by 7 grandchildren and 13 great grandchildren. John and his wife Priscilla live in North Andover. Their extended family includes daughter Jennifer and her husband Rusty Bilodeau of North Andover and their children Abigail, Hope, and Anthony; daughter Sarah and her husband Billy Graham of Arlington and their children Liam and Ayla; and daughter Carolyn and her husband Pete Ripley of Arlington and their children Camille and June. Marjorie and her husband Bill Kurtz live in Canton, CT. Their extended family includes son Dave Flanders of Burlington CT and his children Ryan, Zachary, Bella, and Davey; son John Flanders and his wife Sheralyn of Weatogue CT and their son Cameron; son Billy Kurtz and his wife Stacy of Simsbury CT; and daughter Capri Kurtz and her husband’ Tim Kendzia of Canton CT and their daughter Raia. A private family celebration of life is planned for Wednesday, July 10, along with burial at the National Cemetery in Bourne MA.

Camille Josephine (Birch) Fox passed away peacefully on Sunday, July 7, 2019 in North Andover at the age of 96. Born and raised in Antwerp, Belgium, Camille met her future husband, John Fox, during World War II. He had been part of the US... View Obituary & Service Information

The family of Camille Josephine (Birch) Fox created this Life Tributes page to make it easy to share your memories.

Send flowers to the Fox family.