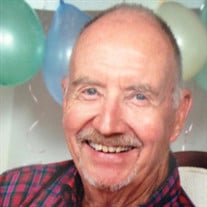 Bruce G. Arnold Bruce G. Arnold, 88, formerly of Vineland, NJ and Sun City Center, FL, passed away on April 17, 2020 at the Mary Immaculate Nursing and Rehabilitation Center, in Lawrence, MA from complications of Covid 19. Well known for his charm and sense of humor, Bruce was born in Plainfield, NJ, and was the son of the late Stuart Gordon Arnold and Marion (Smedley) Arnold. He was a graduate of Thomas Jefferson High School and Union Junior College in Elizabeth, NJ and Upsala College, East Orange, NJ. He served as a Corporal in the Quartermaster Corps. of the United States Army during the Korean Conflict, stationed primarily in Italy and Germany, during which time he discovered that he actually liked Army food. Following his graduation from Upsala, Bruce began what became a long career working in sales and marketing in the oil industry, working for such national companies as Exxon and Coastal Oil Companies and local companies Miles Petroleum and L.S. Riggins Co., both based in Vineland. In 1958, he met and married his first wife, Rosemarie, with whom he had two children, Sherilyn and Jeffrey. They divorced in 1974 and he later married the former Naomi Cooklin with whom he relocated to Sun City Center, Florida, where they enjoyed playing golf and tennis with their many friends and where Bruce was elected to the job of his dreams: the Presidency of the Sun City Center Community Center. A lifelong Christian Scientist, Bruce was also active in the First Church of Christ, Scientist, in Vineland and later in Ruskin, Florida. He is survived by his wife, Naomi, his two children, Sherilyn Frey and her husband Mark of King of Prussia, PA, Jeffrey Arnold and his wife Carol of Andover, MA, three grandchildren: Jake Arnold of West Roxbury, MA, Samantha Arnold of Boston, MA and Katie Frey of King of Prussia, PA, as well as stepdaughter, Hilary Cooklin of Bethel, CT and former caregiver, Rena Hunt of Tampa, FL. A memorial will be held privately and at a later date.

The family of Bruce G. Arnold created this Life Tributes page to make it easy to share your memories.

Send flowers to the Arnold family.