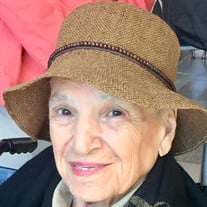 On Monday, September 20, 2021, Bessie A. Daher, loving wife and mother peacefully passed away at her home in North Andover surrounded by her family, she was 96. Bessie was born in Nashua NH the daughter of the late Richard A. and Nemery (Ganem) Maroon. She was the devoted wife of George J. Daher of Lawrence and North Andover who passed away in 1986. Bessie was one of six children raised in a strong close knit ethnic family. She survived the Great Depression, WWII and countless world events. These events influenced her life and the result was an independent, strong willed and caring woman who was dedicated to her family and faith. Bessie held a variety jobs in her 96 years, from selling tomatoes from her fathers garden, ice cream scooper and bakery assistant. During WWII she volunteered as an air raid warden and she rationed food at the local market. At the age of 23, she married her husband George and moved to the Merrimack Valley where she embraced the community, culture and cared for her extended family. She was soon followed by her sisters Nan Mallen and Sally Daher. The Maroon sisters were a force to be reckoned. Along with her husband she raised three children, built a successful floor covering business and worked for the IRS. She was a woman of conviction who demonstrated integrity and strong moral values, she spoke her mind. Bessie found an abundance of joy in the simple pleasures around her. She took great joy in spending time in her home and gardens. She was happiest when she was entertaining. Her New Years Eve lobster dinners were quite an event. She inherited her mothers passion for cooking Lebanese food. She always prepared Arabic specialty foods and pastries for family events. Bessie‘s Sunday night dinners and birthday celebrations were open to all, for Bessie cooking and sharing were synonymous with love. She enjoyed a friendly poker game with her sisters, reading the Boston Globe and Tribune and keeping up with current events. She craved an occasional trip to the casino, seaside picnics at Rye Harbor, spending time in the Florida sunshine where she made new friends and memories and of course enjoying her signature cocktail, a classic martini. As the years past and our friends mothers passed she was lovingly referred to as “Everyone’s Mother” She was blessed with good health, a sharp mind and beautiful smile. We were blessed to have her with us for all these years. She is survived by her children: Joseph G. Daher and Douglas E. Daher of North Andover, Marian D. Ierardi and her husband Dominic of Estero FL, her grandsons Adam J. Daher, Nathan J. Daher and his wife Ashley of Boston and her sister Hazel M. LaPlante of Montreal, Canada and several nieces and nephews. She also had a special relationship with John Michael and Josh Belko. She was predeceased by her siblings Anna A. Maroon, Edward R. Maroon, Nan B. Mallen and Sally M. Daher and her niece Joyce Daher Belko. Arrangements: At the family’s request, a private Mass of Christian Burial was celebrated at St. Anthony’s Maronite Catholic Church followed by interment at St Anthony’s Cemetery. Arrangements are under the direction of the John Breen Memorial Funeral Home, Inc. For online condolences and other information please visit us at www.breenfuneralhome.com.

On Monday, September 20, 2021, Bessie A. Daher, loving wife and mother peacefully passed away at her home in North Andover surrounded by her family, she was 96. Bessie was born in Nashua NH the daughter of the late Richard A. and Nemery... View Obituary & Service Information

The family of Bessie A. Daher created this Life Tributes page to make it easy to share your memories.

Send flowers to the Daher family.