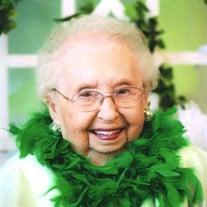 Bertha Eva (Bedard) O'Neil, 101, of Lawrence, Massachusetts and Chelmsford, Massachusetts passed away on Wednesday, March 17th, 2021 at the D'Youville Senior Care Center in Lowell, Massachusetts. She was born in Lawrence on November 9th, 1919 to the late Joseph and Delia (Pellerin) Bedard. Bertha was a graduate of Saint Anne's Grammar School as well as attended Saint Anne's High School. She had worked as a Tester for ITT Semi-Conductors in Lawrence for 20 years before retiring in 1982. Bertha enjoyed her day with her friends at the Chelmsford senior center. She played bingo and cards with friends at McFarlin Manor, where she lived. Bertha was in charge of the sunshine club, which organized trips for the members. Bertha was talented in sewing and crafts, was famous for her raggedy Ann and Andy dolls. She was also famous for her banana bread, black moons, blueberry pie, and french meat pie. She was the most kindest, selfless, giving person, to all that knew her. She was a former member of the Saint Patrick's Ladies Sodality as well as Saint Patrick's Church before moving to Chelmsford where she attended Saint Mary's Church. Wife of the late Edward J. O’Neil Her family members include her Daughters: Judith O'Neil of Lawrence, MA., Patricia Stowe of Derry, NH, Linda Daley of Chelmsford, MA and Sharon O'Neil of Lawrence, MA. As well as 12 Grandchildren, 20 Great Grandchildren, 1 great-great granddaughter and 2 Nephews. Her daughters-in-law Joan and Jacqueline. Mother of the late Richard O'Neil and Edward R O'Neil Sister of the late Rita Belanger. Bertha’s services will be private and are under the direction of the John Breen Memorial Funeral Home, Inc., 122 Amesbury Street, Lawrence, Massachusetts. For online condolences and other information please visit us at www.breenfuneralhome.com.

The family of Bertha Eva O'Neil created this Life Tributes page to make it easy to share your memories.

Send flowers to the O'Neil family.