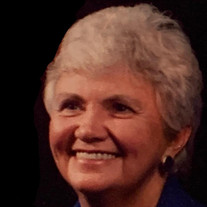 Bernice (Bernie) Murphy Burke, age 88, formerly of Lawrence, MA, Chocorua, NH and Salem NH, passed away peacefully at Ashland Farms, North Andover surrounded by her loving children on July 17, 2021. Born in Lawrence, MA on December 30, 1932, Bernie was the dearly beloved daughter of the late Timothy Christopher and Kathyrn (O’Hara) Murphy, and her late brother Donald who was a Marist Brother, known as Brother Timothy Daniel, FMS. Bernie attended St. Rita’s Grammar School, was a 1950 graduate of St. Mary’s High School and The Wyndham School in Boston. Her career began as a legal secretary for local attorneys followed by 18 years as a full time stay-at-home mom. After her children were in school, she enjoyed working at the Community Saving Bank in South Lawrence. Bernie met the love of her life, the late John (Jack) Burke (CCHS ’49), at a high school dance and in her senior year they were crowned the King and Queen of the Prom. After a courtship that spanned Jack’s Naval service overseas in the Korean War, they were married at a big wedding in St. Mary’s Church followed by a reception at the Andover Country Club. Their married life was filled with dancing, laughter, extensive travel and many, many friends. Bernice and Jack raised their six children in their Bailey Street home along with their dogs Mike and Tara and they became active parishioners of St. Patrick’s Church. Bernie was a devout Catholic and a member of Our Ladies Sodality along with attending all the activities and sporting events of her children. In later years, she attended Mass at Our Lady of the Mountains, North Conway, Mary, Queen of Peace in Salem and St. Michael’s in North Andover. With an open door policy for family and friends that extended from Bailey street to Chocorua, NH, she and Jack welcomed guests to their Heavenly Hill Bed and Breakfast. Visitors from around the world left notes in their guest book sharing that they came as strangers and left feeling like they had visited old friends, which many of them became over the years. They enjoyed hosting family gatherings, weddings and many weekends with friends at Heavenly Hill. Bernie’s gracious warmth and delicious breakfasts made her a fabulous host. Bernie & Jack loved to travel with their trips to Austria, England, Germany, Aruba & St. Maarten. In later years, she went glacier-hopping in Alaska, snow-mobiled in Jackson Hole, cruised to Bermuda, visited her granddaughter in Hawaii, roamed the countryside in Ireland and even walked in the St. Patrick’s Day parade in Dublin. Bernie enjoyed her many friends from The Moving On Group, a local support and social group for widows and widowers and The Club at Meadowbrook in Salem where she lived until moving into Ashland Farms in North Andover. There are many happy memories of holiday celebrations with her six children, their spouses, ten grandchildren and six great grandchildren at all of her homes which were filled with laughter and love and of course, shenanigans. Bernie is survived by her children, Colleen King and her husband Thomas of Hampstead, NH, Timothy and his wife Donna of Lawrence, Ann Marie Fogg-Brown and her husband William of Andover, Shaun of Salem, NH, Terence and his wife Lena of Harwich, MA and Sheila Amero and her husband David of East Wakefield, NH; 10 grandchildren, 6 great grandchildren and several cousins, nieces and nephews. Her family wishes to thank the staff and nurses at Ashland Farms and Compassus Hospice Care for their love, caring and support for their Mom. Friends and family may call on Thursday, July 22, 2021 from 4:00PM to 7:00PM at the John Breen Memorial Funeral Home Inc. 35 Merrimack St. North Andover, MA, 01845. Her funeral Mass will be celebrated on Friday July 23, 2021 at 10:00AM In St. Michael’s Church, 196 Main Street, North Andover, MA, 01845. Burial will follow at Holy Sepulchre Cemetery, Waverly Rd. North Andover. Memorial donations in her name may be sent to The Marist Brothers Retirement Fund, Provincial Development Office, 4200 West 115 Street, Chicago, Illinois 60655.

The family of Bernice (Bernie) M. Burke created this Life Tributes page to make it easy to share your memories.

Send flowers to the Burke family.