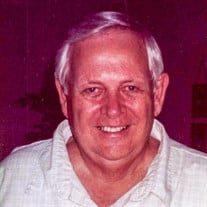 Arthur L. Royer was born in Haverhill, Massachusetts on May 20, 1932 to the late Marie (Caron) Royer. He graduated from St. Joseph's Grammar school and St. James High School in Haverhill, MA. At St. James High school he participated in an IQ test for all high school students in the Archdiocese of Boston, earning the highest score of all the students. He received an Associates Degree in Electronics at Lowell Tech Institute. Arthur graduated with honors from Northeastern University with a B.S. Degree in Engineering. He was a member of the Signa Epsilon Rho honor society. Arthur served in the United States Navy as an Electronic Technicians Mate during the Korean War. He retired from Western Electric as a Department Chief after 36 years of service. He enjoyed traveling, golfing (former member of Andover country club) cross word puzzles, and spending winters at his condo in Florida. He was an Amateur Gourmet Cook. He is survived by his wife and best friend and caregiver Gloria A. (Zampelli) Royer to whom he was married for 62 years. He was the brother-in-law of Jenny Woidyla of Salem, Alice Indoccio of Lawrence, Elaine & Frank Vallely of Watertown, Doreen & Hebert Serpa of Methuen, Evelyn Royer of Groveland and Elsie Royer of Florida. He is also survived by many nieces, nephews, great nieces and great nephews, as well as many cousins and 6 god children. He also leaves his brother Richard of Gloucester. He was predeceased by his brothers Norman, Donald, Frederick and sister Phyllis. Arthur was a very gentle man, who was loved by all and will truly be missed. Relatives and friends are cordially invited to call on Thursday, March 15th, 2018 from 10:00 a.m. to 12:00 p.m. at the John Breen Memorial Funeral Home, Inc., 122 Amesbury Street, Lawrence, MA. His funeral service will take place immediately following the wake at 12:00 p.m. in the funeral home. Entombment will follow in St. Mary-Immaculate Conception Cemeteries Chapel & Mausoleum, Lawrence, MA. For online condolences and other information please visit us at www.breenfuneralhome.com.

The family of Arthur L. Royer created this Life Tributes page to make it easy to share your memories.

Arthur L. Royer was born in Haverhill, Massachusetts on May 20,...

Send flowers to the Royer family.