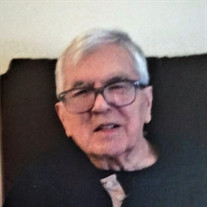 Anthony J. Stopyra, 89, resident of Lawrence, died on Wednesday, July 5, 2017 at Parkland medical Center in Derry NH. He was born in Lawrence, on February 19, 1928 to Peter and Agnes (Sieizega) Stopyra. Educated in Holy Trinity Grammar School, a graduate of Central Catholic High School in Lawrence. He served in the United States Navy during World War II, having served as a Radioman 3rd Class on the US NAS Pensacola and the USS Yellowstone, AD 27. He worked for Western Electric as a Supervisor for 38 years until his retirement. He was a member of the Knights of Columbus, and was also a longtime parishioner Saint Patrick Church in Lawrence. He is the husband of the late Madeline (Verolla) Stopyra. He leaves his son; Peter Stopyra of Salem, NH and daughter; Beverly Stopyra of Salem, NH and dear friend Janet Stopyra of Florida. Brothers and sisters; Helen Previte of Salem, NH, Fr. David Stopyra OFM Conv. of Chicopee, MA, Mary Pitochelli of North Andover, as well as several nieces and nephews. Predeceased by brothers and sisters; Fr. Alfred Stopyra OFM Conv. Francis Stopyra, Stanley Stopyra, Charles Stopyra, Walter Stopyra, Katherine Diazdosz, Victoria Stopyra, and Theresa "Terry" Champagne. A funeral service will take place on Saturday, July 8, 2017 at 11:00AM at the funeral home. A burial will follow in the Immaculate Conception Cemetery, 29 Barker St. Lawrence, MA, 01841. Family and friends may call on Saturday, July 8, 2017 from 9:00AM to 11:00AM at the John Breen Memorial Funeral Home, Inc. 122 Amesbury St. Lawrence, MA. For more information or to send an online condolence please visit our website at: www.breenfuneralhome.com. In lieu of flowers at the families request give some one you love a hug.

The family of Anthony J Stopyra created this Life Tributes page to make it easy to share your memories.

Send flowers to the Stopyra family.