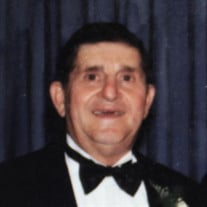 Anthony I. Camasso, 93 of Lawrence, Massachusetts, died peacefully at Westford House Nursing Home, in Westford, MA, August 13th. He was born in Lawrence on August 3, 1928, son of the late Alexander and Rose (Izzo) Camasso. Anthony was educated in the Lawrence Public Schools and a graduate of Lawrence High School. He was a parishioner of Corpus Christi Parish at Holy Rosary Church in Lawrence where he also served as an usher. He was a Veteran of the United States Marine Corps serving at Camp Lajeune, in Jacksonville, North Carolina. After Anthony served his country, he worked in the upholstery business for several years. Later he worked for Western Electric as a Quality Control Inspector for almost 30 years. Anthony was a 4th degree member of the Knights of Columbus, Lawrence Council #67, and a member of the Disabled American Veterans, Chapter 2 in Lawrence. He enjoyed gardening, listing to Swing era music and watching the Red Sox and Patriots. He especially enjoyed raising his family. His family members include his wife Christine who recently passed away, they were married for 72 years. Son: David A. Camasso of Lawrence, MA Daughter: Donna M. Camasso of Lawrence, MA Son: Mark A. Camasso and his wife Judith of Methuen, MA Grandsons: Justin Camasso of Haverhill, MA Randy Camasso of Haverhill, MA and Spencer Camasso of Methuen, MA Brother: Charles Camasso and his wife Jean of Derry, NH As well as several nieces and nephews Services will be private and are under direction of the John Breen Memorial Funeral Home, Inc., 122 Amesbury Street, Lawrence, MA. For online condolences and other information please visit us at www.breenfuneralhome.com.

The family of Anthony I. Camasso created this Life Tributes page to make it easy to share your memories.

Send flowers to the Camasso family.