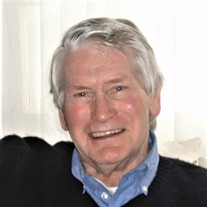 Andrew Coburn of Andover died August 7 at the V. A. Hospital in Bedford, Mass. He was born May 1, 1932 in Exeter, N.H., the son of Andrew and Georgiana Coburn. A 1950 graduate of Haverhill High School, he joined the Army and later attended Suffolk University. Andrew received an honorary doctorate from Merrimack College in 1987. Following military service, Andrew joined the Lawrence Eagle-Tribune which launched his career as an award-winning reporter and editor. He later, with associates, published his own local newspapers. Andrew was a New York Times best-selling author, publishing his first novel, "The Trespassers," in 1974. He was the author of 13 novels, a novella, a collection of short fiction and numerous short stories. His novels have been translated into more than 14 languages; three of which have been made into French films. Among his awards are the Eugene Saxton Memorial Fellowship, AP and UPI awards, and a nomination for the prestigious Edgar Award for crime fiction. Throughout his career, Andrew's work was recognized as "pitch-perfect," "incisive," "gripping," and "chillingly elegant." John Daley of Newsday said of Andrew, "Great mystery writers are rare but Coburn certainly rank[s] among them." Fellow author Ed Gorman said "He is a major American writer whose talents as both a stylist and social observer are of the first rank." The London Sunday Times noted he was "as good on sad women as bad men, his prose so flexed and edged as to make paranoia fashionable." The Umass Amherst Special Collections is the custodian of Andrew's collected papers. Andrew was pre-deceased by his beloved daughter, Heather, and is survived by his wife, Bernadine ("Bunny") Casey Coburn; his children Kevin (Blanche Murray), Cathleen (Michael Caruso), Krista (Daniel Earley), Lisa (William Brennan), eight grandchildren and four great-grandchildren, his sister Julie Masera (companion Gerald Assad), half-sister Andrea (Robert Tillson), and many cherished nieces and nephews. Family and friends may call on Tuesday, August 14, 2018 from 3:00PM to 6:00PM. A service will be followed at 6:00PM at the John Breen Memorial Funeral Home Inc. 35 Merrimack St. North Andover, MA, 01845 The family would like to thank the entire staff at the Denali unit of the Bedford V.A. for their compassionate and loving care.

Andrew Coburn of Andover died August 7 at the V. A. Hospital in Bedford, Mass. He was born May 1, 1932 in Exeter, N.H., the son of Andrew and Georgiana Coburn. A 1950 graduate of Haverhill High School, he joined the Army and later attended Suffolk... View Obituary & Service Information

The family of Andrew Coburn created this Life Tributes page to make it easy to share your memories.

Andrew Coburn of Andover died August 7 at the V. A. Hospital...

Send flowers to the Coburn family.