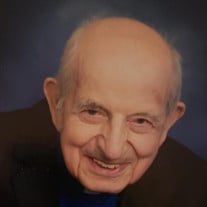 Epping – Deacon Allan A Ramey, 94 of Epping N.H., died peacefully Monday, April 20, at Rockingham County Nursing Home in Brentwood N.H. Born in Lawrence Massachusetts on February 7, 1926 to Anthony P. and Marie Ramey, Allan grew up in the Plains district of the city. He graduated in 1943 from Lawrence High School and immediately enlisted in the Army Air Force where he served for three years during WWII as a gunner on a B29. He was stationed at Tinian located in the Solomon Island chain and flew combat missions over Japan earning him many decorations including the Air Medal. After the war he returned to Lawrence in 1946 and studied Photography and Art. He worked until 1950 as a professional photographer in the local area. Allan was married in 1950 to his loving wife of 69 years, Alice C. (Solomon) Ramey. Allan continued his education receiving his Associates degrees in Mechanical and Industrial Engineering from Lowell Tech and a Bachelor’s Degree from Northeastern University in 1964. He went on to work for various commercial and aerospace companies as a Senior Engineer and Quality Control Manager until his retirement in 1986. In 1971, Allan cofounded one of the major Charismatic Prayer Communities in New England which still exists today, known as “The Community of God’s Light”. He completed 3 years of study at Saint John Seminary and in 1976 was ordained the first Permanent Deacon in the Maronite Church, with faculties in the Western Church. As Deacon, Allan served his lifelong parish, Saint Anthony’s Maronite Catholic Church in Lawrence for over 25 years, involved in various ministries including hospital visitation, support of liturgy activities, and ministry to the entire community. After retiring in 1986 from industry, Allan served as the Director of Saint Basil Salvatorian Center in Methuen until 1998. His duties included managing the retreat house, conduct various spiritual programs including those for engaged couples, parish advisory groups, prayer group activities, and many other religious programs. Allan enjoyed many past time hobbies including photography, painting in acrylic and oils as well as water colors, and collecting religious arts. Allan was a dedicated and devoted husband and a loving father. He honored his parents throughout his life, and was a loving and loyal brother to his siblings and a kind and loving uncle, grandfather and great grandfather. He always took pride in his entire family, and especially his wife, Alice, who stood by his side in all things and physically assisted him when needed in their spiritual ministries. In his later years Allan moved to Epping, NH and spent most of his time caring for his wife Alice, and being an inspirational influence to his grandchildren. He touched each and every one of them, and had a profound impact on their lives. Deacon Allan dedicated his life to lifting souls, and in his gentle and kind way encouraging them ever closer to God. He is now wrapped in the loving arms of our Lord and Savior, Jesus Christ. He is survived by his loving wife of 69 years Alice, son, Dr. Allan Ramey Jr. of Sterling MA. , daughter and son in law, Mark and Mary Anne (Ramey) Alliegro of Campton N.H., daughter and son in law, Robert. and Donna (Ramey) Meade of Raymond N.H., son and daughter in law Paul and Anne Ramey of Epping N.H., brother and sister in law Leonard and Evelyn Ramey of Methuen MA., 16 grandchildren, several great grandchildren and nieces and nephews. He was predeceased by his sister and brother in law, Nicola and Vivian Ramy of Methuen MA., granddaughter Jessica Ramey and daughter in law Marita Ramey of Sterling, MA. A private service will be held at Saint Anthony’s Cemetery in Methuen MA. A Celebration mass will be held at St Anthony’s Church in Lawrence at a date to be determined. In lieu of flowers, donations may be made to St Anthony’s Maronite Church, 145 Amesbury St., Lawrence, MA. 01841 or a charity of your choice.

The family of Deacon Allan A. Ramey created this Life Tributes page to make it easy to share your memories.

Send flowers to the Ramey family.