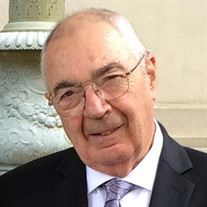 Albert A. David, 90, of Methuen, passed away on Wednesday, April 11, at Lawrence General Hospital. Born in Haverhill, Al was educated in the Haverhill schools and was a graduate of Haverhill Trade School. Upon graduation from high school, he enlisted in the United States Navy and served on a submarine in the Pacific during World War II. He worked as a Supervisor at New England Telephone for some 30 years. He was deeply involved in scouting through Troop 4 at St. Augustine’s School, and in recognition of his dedication was awarded the Silver Beaver Award from North Essex Council. Al was an avid reader and gardener. He enjoyed fine and not-so-fine wines. A lifelong learner, in recent years he embraced technology as a means of staying informed and staying in touch with friends and family. He will be remembered as a loving and supportive husband, parent, grandparent, and friend. He was a son of the late Albert P. and Margaret I. (Castine) David. He is survived by his beloved wife Mary A. (Hester) David; his children: Allen David and his wife Catherine, Ann David Horne, and John David and his wife Charlotte. He is also survived by his grandchildren: Jonathan Horne and his wife April, and Andrew David and his wife Jillian, as well as two great-grandchildren: Ava and Anya Horne. Other surviving family members include his brother Richard David and numerous nieces and nephews. Al was predeceased by his sister Jeanette (David) Spokus, his brother Leon David, and his son-in-law Horace Horne. At Al’s request, funeral services are private. Memorial contributions may be made in his name to Circle Home VNA, Home Health and Hospice Care, 847 Rogers St., Suite 201, Lowell, MA, 01852. To send an online condolence please go to www.breenfuneralhome.com.

Albert A. David, 90, of Methuen, passed away on Wednesday, April 11, at Lawrence General Hospital. Born in Haverhill, Al was educated in the Haverhill schools and was a graduate of Haverhill Trade School. Upon graduation from high school,... View Obituary & Service Information

The family of Mr. Albert A. David created this Life Tributes page to make it easy to share your memories.

Albert A. David, 90, of Methuen, passed away on Wednesday, April...

Send flowers to the David family.