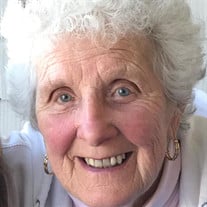 Adrienne L. (Murphy) Markham, September 14, 1936 – August 1, 2019. Died August 1, 2019 peacefully in her home in York Beach, ME. Born in Lawrence, MA the daughter of the late Dennis and Noela (Tremblay) Murphy, and the sister of the late Michael Murphy. Noela was a homemaker and mender in the Lawrence and Billerica mills and both Dennis and Michael were Lawrence Police Officers. Adrienne attended Lawrence Public Schools and graduated high school from Saint Mary’s where she was an A student and a formidable basketball and tennis player. Adrienne earned a Bachelors degree in Nursing from Saint Anselm College in 1959 and a Masters degree in Nursing from the University of Massachusetts, Salem in 1962. Later she matriculated at Boston University in a Doctorial program in Nursing Science completing twelve credits. Throughout her nursing career, Adrienne served as an O.R./medical surgical nurse in several area hospitals including Bon Secours/Holy Family, Lowell General Hospital, Saint Joseph’s Hospital Lowell, and as House Supervisor at Bon Secours/Holy Family and Portsmouth Regional, and in the psychiatric unit at the Bedford VA Hospital. Also a thoughtful, dedicated and focused nurse-educator Adrienne began a parallel career in nursing instruction at the Lawrence General Hospital School of Nursing and then from 1974 – 1998 as an instructor and professor of nursing at Northern Essex Community College in Haverhill and Lawrence, MA. A proud member of the MTA, Adrienne was awarded Professor Emerita of Nursing status from the Board of Trustees at Northern Essex in 1999. Adrienne married the late Thomas F. Markham, Jr. of Lowell, MA in November 1959 and together bought a home and began a family in Chelmsford, MA with son Thomas being born in 1965. Also a career educator, Thomas Markham Jr. was appointed Superintendent-Director of Northeast Regional Vocational School District in Wakefield, MA that brought the family to a new home in Wakefield. With a career in public education too, Thomas Markham III is today Business Administrator at EDCO Collaborative in Bedford, MA and serves on the Wakefield School Committee. Adrienne and Thomas loved the beach and ocean and enjoyed summers with family and friends at Rye Beach, NH, Eliot, ME and eventually retiring to York Beach, ME. They were also annual visitors to Edgartown, MA on Martha Vineyard where she had years of fond memories. In her early retirement years Adrienne also enjoyed world traveling with friends being able to visit Italy, Portugal, Spain, Istanbul and Egypt. Adrienne’s traveling stopped when her two grandchildren, Nora Markham and Thomas Markham IV, were born and immediately occupied her heart, soul and every waking moment. Adrienne is survived by her son, Thomas and his wife, Diane and grandchildren Nora and Thomas, all of Wakefield, MA; nieces and nephews Dennis Murphy of FL, Maryellen (Murphy) Bourgoine of Salem, NH, Maureen (Murphy) Bean of Methuen, Hannah Murphy-Jones of KY, Stephen Murphy and Terrence Murphy both of Northbridge, MA. Also survived by her sister-in-law Donna Markham Carroll and her husband Lawrence of Lowell, MA and now of Redondo Beach, CA and their children Lawrence Carroll, Jr, Sean Carrol and Elizabeth Markham Gustavson, all of Lowell and now Los Angeles county, CA. Each niece and nephew has children that Adrienne enjoyed hearing about and spending time with at family occasions, holidays and, of course, the beach. Also in her retirement years, Adrienne enjoyed staying active with daily walks, shopping routines, gathering with friends at Cape Neddick Country Club and volunteering seasonally at the Ogunquit Playhouse and year round at York Hospital. A funeral mass will be celebrated on Wednesday, August 7th, 2019 at 10:30AM A funeral mass will be celebrated on Wednesday, August 7th, 2019 at 10:30AM Most Blessed Sacrament Church, 11 Grove Street Wakefield, MA, 01880. Burial services are private. Friends may call on Tuesday, August 6th, 2019 from 4:00PM to 8:00PM at the John Breen Memorial Funeral Home Inc. 122 Amesbury St. Lawrence, MA, 01841. In lieu of flowers friends are asked to consider a donation to either The Key Foundation of Lowell, MA (http://www.keyfoundation.org/) or the Saint Jude Children’s Hospital of Memphis, TN (https://www.stjude.org/).

The family of Adrienne L (Murphy) Markham created this Life Tributes page to make it easy to share your memories.

Send flowers to the Markham family.